It is time for a new rare card rankings for all the rare cards in Clash Royale! We will be having a power ranking, 23-1, of the rare cards in Clash Royale as of May 2018. As many of you know, I have done this ranking before, back in February with the same 23 cards. The top 5 cards then, in order, were hog rider, goblin hut, fireball, musketeer, and mini-PEKKA. Let’s see how much those rankings were shaken up over the past couple balance changes and updates!

You can view the old ranking here: https://clashfordummies.com/2018/02/21/clash-royale-rare-card-rankings-february-2018/ 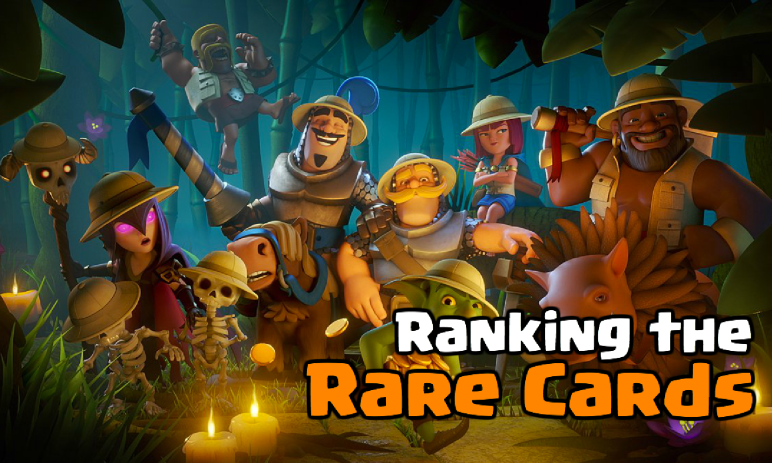 How the Rare Cards are Ranked

When ranking these cards we put a lot of thought and effort into what makes the best rare card the best. We are considering a variety of different ways to rank which are order in importance as follows:

So now that you know what we are judging on, lets go ahead and get into the rankings, starting with number 23!

Note: Text color indicates which way the card is trending in regard to the February rankings.

Without a doubt, the heal is the worst rare card in Clash Royale and possibly the worst card overall. The only niche use of the heal is to keep half-dead minion hordes or three musketeers alive, which rarely happens. Most of the time, the heal ends up being a waste of three elixir as, even with the heal, the troops still end up being countered pretty easily.

In my opinion, I honestly don’t think that the bomb tower is that bad of a card, especially for dealing with any giant beatdown pushes. It does have an insane amount of health, as well as deals a good amount of splash damage to ground troops. The big issue with the bomb tower is that it cannot take out air troops, which means it is quickly overwhelmed by any air support troops.

In the Clash Royale meta, the barbarian hut is in about the same spot as the bomb tower. It has a ton of health, can end up dealing lots of damage, but can’t take out air troops in any way. Of course, the seven elixir that the barb hut costs doesn’t help its case either. There are too many good defensive buildings in Clash Royale for the barbarian hut to be in the meta.

At least the zappies are a little bit on the rise. While the electro-wizard is still far and away the better option here, the zappies are being played a little bit more across all gamemodes, especially now that they can shoot air troops. Unfortunately, they still don’t have enough health to secure their spot at the top, especially with the popularity of the fireball.

There are too many solid options out there for the flying machine, a card that can die to the fireball with ease, to be a popular card in the Clash Royale meta. The dart goblin can offer the same range as the flying machine for one elixir less, while the mega minion gives you more health to put in behind a tank, again for one elixir less. Buff this card a bit to see it right at the top!

It’s never made me happier to see a card this low on the rare card rankings. I absolutely despise the furnace and the cheap chip damage that it provides for only 4 elixir. Luckily, with the popularity of the fireball and rocket, the furnace hasn’t really been going anywhere. It is way too easy to counter all the fire spirits with a slow moving card placed in the back of your side.

It really seems to be a recurring theme in the card rankings that the cards that can kill both ground and air troops are higher up in the rankings. Due to the valkyrie only being able to take out ground troops, she slots in pretty low in the 17th spot. Still, the valkyrie can be a solid secondary tank troop and can shred ground troops with the right placement.

The goblin hut got absolutely smacked in these rankings, dropping 14 spots from #2 all the way down to #16. The nerf to spear goblins in the last balance changes was the nail in the coffin for the goblin hut, which was considered the most annoying card just a few months ago. That being said, the goblin hut is still a decent card, just not as OP as it used to be back in February.

Even with his insane range that can snipe buildings from your side of the map, the dart goblin doesn’t rank up that high in the rare card rankings. He does add to the many log bait cards that are currently in Clash Royale, but there are stronger ranged units that you would want supporting a push, like the musketeer, wizard, and executioner.

Slowly but surely the battle ram is becoming respected as an independent win condition to use. However, the battle ram still has a long way to go in order to be considered as powerful as the giant or hog rider. It is still pretty easy to counter the battle ram, along with the two barbarians for only two or three elixir, which puts the battle ram right in the middle of the rare cards.

While the rocket doesn’t quite match the fireball at the moment, it is still a great card for taking out a bit bigger units like the witch and the night witch. Of course, you can also use the rocket as a quick counter to the elixir collector. The best value of the rocket though, comes from being able to take out a tower when it is down to its last few hundred hitpoints.

At one point, the wizard was towards the bottom of the meta, especially in rare cards, but now the wizard is one of the top support units behind the giant or golem. It’s great for dealing with any swarm units, especially eventually turning into a counterpush. Even with the executioner being as highly regarded as it is right now, the wizard can still hold its own.

Along with minions, the mega minion is one of the two best air support units in Clash Royale right now. The best part about the mega minion is that it isn’t able to be taken out by the fireball, giving it a ton of value in golem and lava hound decks. With a need for mini-tanks in the game, it is really difficult to see the mega minion going away anytime soon.

The musketeer is at its lowest ranking for rare cards in the last couple rankings, but that still means that the musketeer is a top 5 rare card. One of the best support cards in Clash Royale, the musketeer can fit in with literally any deck possible. It is also a great way to counter most cards, being able to kill all air cards and most ground cards.

With the exception of the zap and log, the fireball is currently the best spell in Clash Royale. This card can offer so many even or positive elixir trades, taking out the wizard, electro-wizard, and musketeer if one level above. It ends up dealing a good bit of damage on the tower too, which makes it solidify its three spot in the rare card rankings.

Unfortunately for it, the hog rider was taken out of its number one spot. However, it still doesn’t mean that the hog is diminishing in power, as it is far and away the number one deck archetype out there. Fitting in so well with a ton of different deck types, like hog mortar and log bait, the hog rider is the card to level up if your clan mates are willing to donate!

And our new number one card, up 5 spots from number 6, is the ice golem. There should be no doubt that the ice golem is the best rare card in Clash Royale, giving absolutely insane value for only two elixir, Usable on defense or offense, the ice golem can provide a secondary tank option or a nice kite for a larger troop that your tower can shoot down.

So that is going to wrap it up for our rare card rankings for May of 2018! Stay tuned soon to see our epic and legendary card rankings soon. Thanks for reading and comment below what you think of the rankings!