LavaLoonion can vary a lot based off the base you are attacking, having as little as 2 lava hounds or as many as 6. The same rule goes for the balloons, you can have up to 32 balloons or have as little as 12 balloons; it really varies on the base you are attacking. Minions can also be used you aren’t bringing a lot of lava hounds. You will need clean up and you need either a lot of lava pups left or some minions to help you clean up.

As for spells, you generally want to be using both haste or rage spells with your LavaLoon attack. Both pair great with the balloons to send them in quickly onto defenses. A heal spell or freeze spell wouldn’t be amiss in the LavaLoonion army composition though! Also, you should have a poison spell somewhere in your army, so that you can kill/slow CC troops. Now, without further ado, here is my favorite LavaLoonion strategy to use at Town Hall 10.

This LavaLoon army composition features 5 lava hounds (with one in the clan castle) with 25 balloons (one in the CC). This will provide enough protection, while also giving enough damage to completely take out the base. All rage spells will give you enough spread to cover almost the entire base, with a poison to slow the clan castle troops. Your heroes can be used for clean up after your balloons take out all the defenses.

The first step of any Clash of Clans LavaLoonion raid is to send in your lava hounds to begin to tank for your balloons. Send your lava hounds in at different angles at the air defense so that a seeking air mine or an air bomb can’t hit multiple hounds at once. Hopefully, your lava hounds do catch some air bombs though so that they don’t hit your balloons. Also, spreading your hounds will allow more defenses to lock on and shoot the LHs instead of the loons.

You generally want to have 2 lava hounds for each defense, with an extra one having two different options. You can send in the fifth lava hound late, as a back door hound, or you can send it in during your initial push, where it can provide extra cover for your balloons.

Now that your lava hounds are sent in, you have to send your balloons in quickly so that you can take advantage of the tanking of those hounds. There are two options you can take when deploying your balloons. First off, you can go for the precision balloonion strategy where you position a few balloons on each defense. However, that is mostly meant for one stars, so I prefer the balloonion wave strategy, where you spread your loons in a wave across the base.

This guarantees that one defense won’t stay up due to one air bomb and give you a wider spread with balloons more likely to head towards the center of the base.

Once your balloons do finally get towards the center of your base, clan castle troops will be activated to come and fight your balloons. Luckily, you have a poison spell to either kill and/or slow down whatever is inside. The best troops to pop out of the clan castle are as follows:

All of these units will be completely destroyed by the poison spell that you drop. You just have to place your poison spell so that it predicts where those troops will be and not where they where.

If you do a get lava hound or baby dragons coming out of the CC, you are in a bit of trouble, but it’s nothing that your popped lava hounds can’t beat. The poison spell will be used to slow down these troops so that they can’t kill your balloons as fast.

Rage Spells on the Loons

Just like with the poison spell, you want to play the rage spells where your troops are going to be, not where they currently are. This will offer full value of the rage spell instead of only raging a bit of your balloons.

These rage spells will help guide your balloons into the base, as well as help the loons get through some of the more tanky buildings in Clash of Clans at TH10. Always rage around the Town Hall, since hopefully the rage is enough to help the loons take out the TH because of by damage.

At the beginning of your attack, you should save some of your balloons to become “back end” balloons. These backup loons will clear some of the defenses that are tough to get to from your advance squad, saving as many of your balloons as possible to help with clean up later on. 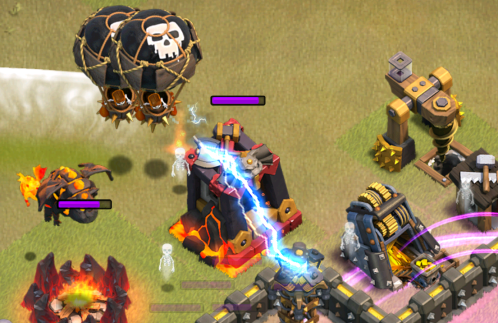 Here the balloons should definitely be precision, with a couple loons for each defense you have been unable to get to yet. If your back end loons are played correctly, all your leftover balloons should meet together in the middle and spread out to clean up the rest of the base for the easy three star attack.

Cleanup with the Pups

All of the defenses are taken out, so now you just have a bunch of other buildings left over to complete your three star. While you should have some balloons left, the primary clean up troop will be the lava pups that popped from the lava hounds. These pups will spread out and hopefully give you enough damage to easily finish the 100%

Along with the balloons and lava pups, this is where you should place your heroes, wherever they are needed most. The queen and the king will do a ton of damage to help you not run out of time, one of the worst enemies in LavaLoonion attacks.

That’s all for our Town Hall 10 LavaLoonion three star strategy guide! I hope that I guided you guys well and now you will be able to three star any TH10 out there. Thanks a ton for reading and comment down below what kind of strategy you want to see a three star guide for next!