Welcome back to the second part of this series, ranking every type of card in Clash Royale. We already did support cards and now we are ranking the top ten best tank cards in Clash Royale! These are cards that are specifically made to be tanks, ranging anywhere from the ice golem to the lava hound. Here are the top 10 tanks in Clash Royale, ranked based off value for elixir and versatility! 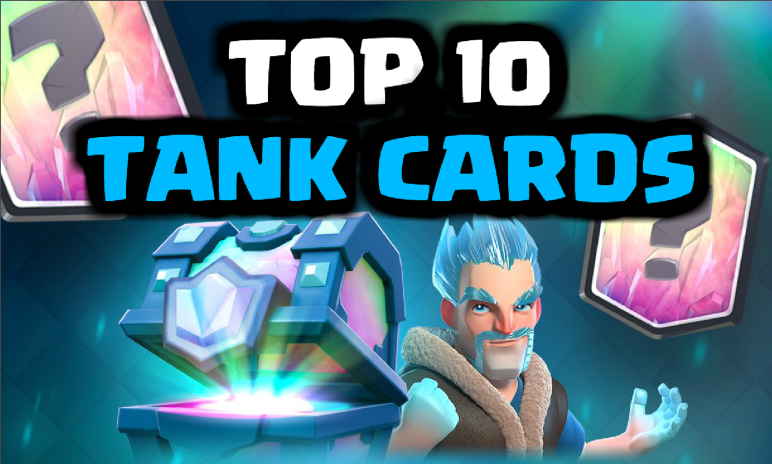 While it could be argued that the bowler is a support card, he is often played as a tank for graveyard decks, which puts him in the tank category in my book. The bowler comes in JUST above the royal giant, mostly because he is more versatile and can defend himself from defensive cards. The bowler can easily take out counter cards like skeleton army and goblin gang, which makes him immune to spam defense. He has a decent amount of health too, allowing the graveyard to build up before he falls from too much damage.

A recent rise by the battle ram puts it squarely in the #7 slot for tanks! In my personal opinion, I don’t think the battle ram is that good of a card, being easily countered by tombstone or any defense. Some players though can use it to extreme precision, pairing it well in bridge spam decks to completely dominate their opponent. The BR is a very skilled card, and when you do use it effectively, you can get a whole lot of value for only 4 elixir.

Now, we get to the point where these tanks are really at the forefront of the meta. The PEKKA might just be the second most popular tank card right now in the game, but that doesn’t mean it is the second best. In fact, the PEKKA is easily countered with the inferno tower, even with a zap. However, you can really use the PEKKA on defense, having it be a great counter to giant, golem, and even the hog rider. From that, you can build a massive counter push that even the inferno tower won’t be able to stop.

As everyone was probably expecting, the giant is going to make it very high up on our tank rankings, coming in at number four. The giant is the most basic tank card in Clash Royale, offering you good damage and good health for only 5 elixir! Almost any card can be paired with the giant, regardless if it is air or ground. While the giant doesn’t have as much health as a PEKKA, he offers a lot more versatility for 2 less elixir, allowing you to build up some massive pushes around him.

Of course, the golem literally defines a tank card in Clash Royale, but it only comes in at number 3. Let’s be honest, the golem is one of the best win conditions in Clash Royale and always will be, but spending 8 elixir can leave you very open for a counterpush. That being said, the golem can three crown an opponent in about a minute if it isn’t countered right, not only offering a whole lot of protection to your support card, but also doing quite a bit of damage itself.

Our runner up tank is going to be the miner, which is so strong right now in the current meta. The miner is one of the cheapest tanks in Clash Royale, but it is also one of the most popular. For 3 elixir, you can get insane value out of the miner, taking out an entire elixir collector or just getting a whole bunch of chip damage onto a tower. This legendary card also pairs well with almost every card in the game, with miner hog cycle decks to LavaLoonion-miner decks to giant-miner all appearing in the meta.

Last, and almost DEFINITELY not least, we have one of the best cards in Clash Royale, the hog rider! The hog rider is extremely popular right now, appearing in almost 40% of matches. The reason why the hog rider is so good is because he is quick, something none of the other tanks have. This lets him pair well with almost any support card (quick+high health combined) and be used in a number of fast, cycle decks and bridge spam decks. The hog can also do some major damage to the tower if left alone!

So those are my top 10 tanks in Clash Royale! Remember, to me, a tank is only a card that will be used primarily as a tank card and has little defensive or support value. Thus, a valkyrie wouldn’t make this list because it doesn’t get played as a tank as often as a defensive card. Thanks for reading and comment your rankings below!