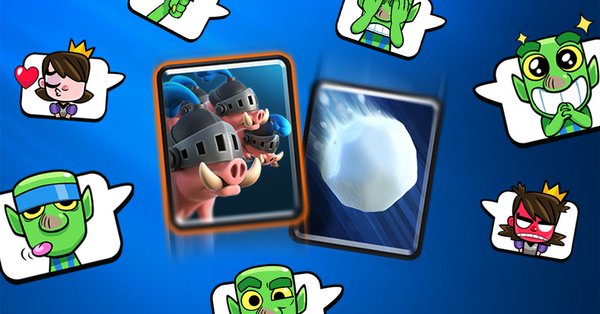 This deck is going to be a pretty classic giant lumberjack deck, featuring the witch and mega minion as support units. Instead of the typical log that would be included here, the giant snowball is going to be your new cheap card, allowing you to hit air troops as well as any ground troops you would have logged back. With this deck, you should be able to win pretty easily in the current meta, using the giant snowball to kill any swarm or cheap troops that your opponent might play.

The mega knight has made a bit of a return in the meta since his recent buff and should fit in pretty well with the giant snowball. The flying machine can be a great support unit, especially when troops can get one shot after being snowballed. Use the mega knight and the miner as your main win conditions, with back up from the giant snowball and fireball. Play a defensive game overall and try to convert your defense into offensive pushes to get the win.

Our final giant snowball deck is a hog cycle deck, with the trifecta of hog rider, musketeer, and mini-PEKKA. Another great trifecta in this deck is going to be your triple spells, which should be able to take down most units that try to counter your hog. Use the fireball to take out musketeers/wizards and cycle between the log and snowball to take out cheaper units. With two ways to kill log bait cards, you shouldn’t have too much of a problem wasting one on a prediction.

With those decks, you should be able to dominate with the giant snowball, almost as well as zap and log. Remember, don’t try to use theses decks unless you level up your giant snowball to be equal with the levels of your other cards. Thanks for reading and comment below what decks you think the giant snowball fits best into!