The September update is finally here! Its the newest update for 2015, however it’s not the biggest or the best. Here are the two update sneak peeks that C4D has articles about:

Here’s the entire update list for the September 2015 Update:

Spell Superiority and a Clan War Tiebreaker!
* Improved Lightning, Poison, Earthquake and Freeze spells!
* Lightning Spell level 7 and 25 new Wall pieces have been added to Town Hall level 10
* Total Destruction is now a Clan Wars tiebreaker – if the score is even at the end of the war, the Clan with more destruction percentage in their best attacks will be the victor!
* Attack and Defense tabs have be added to Clan tabs in the War Stats to quickly see all best attacks in the war for either clan
* The appearance of Wall level 11 has been revamped and looks TOTALLY EPIC 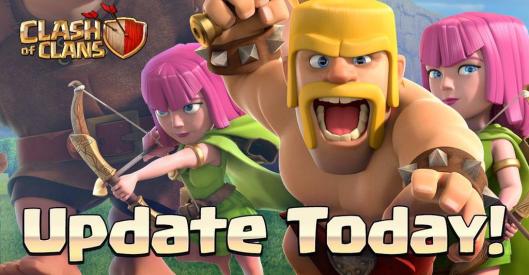 So really this is just a small update. What really counts is the apparent HUGE update that will be announced at ClashCon. Town Hall 11, new dark troop, who knows?! Make sure to subscribe to us on YouTube to see the update action! https://www.youtube.com/channel/UCNo3IxCrp34erbCRLmG8HIA