Today, I have a solid royal giant-hog deck for all players in Arena 7 or 8 in Clash Royale! This is the first of our fan submitted decks, which you can earn iTunes or Google Play GCs for submitting! Thanks to Flaming Feniks for sending in this guide! Anyways, lets go ahead and get into the strategy of this deck:

The average elixir cost is 4.3, so it’s a little more on the expensive side. This deck is almost unbeatable in Royal Arena, and it’s still a very solid deck in Frozen Peak. This deck got me all the way to legendary arena, but it won’t get you any higher than about 3100-3200 trophies. If the player does not yet have a mega minion, they can substitute regular minions in its place.

If you have elixir pump in your hand, get it down once the elixir bar gets to 10. The ideal place to put it would be directly in front of your king tower, because it is the safest from damage from miners and rockets, unless your opponent uses lightning. If your opponent starts off with a push, use your troops to counter his troops and defend. If he doesn’t make a move, drop hog rider alone in order to test out his cards for later in the game. Keep parrying your opponents pushes during this first minute and try to figure out what his strategy is and how he will react to your pushes. If you use barbarians for defense and still have some remaining, drop hog rider right behind them to launch a surprise push. You can push with a leftover musketeer or mega minion/minions, but they won’t work as well as with the barbarians. Don’t use your royal giant in the first minute! You want it to be a surprise.

This is where you begin to start doing more pushes with the hog rider. Keep cycling through your deck back to your hog rider to keep getting chip damage on the opponents tower. If he gets careless and can’t play a defense in time, you’ll end up with a one tower lead, even before the last minute. See if you are able to get two elixir pumps down during this minute to keep your opponent on his toes. Keep defending and launching pushes with the hog rider and leftover defense troops to keep your opponent in check. Save your royal giant until the final minute unless you have a fairly large elixir advantage over your opponent or you successfully defended one of his very expensive pushes. The royal giant should be placed right at the bridge to catch your opponent by surprise, but if absolutely necessary and you have no other options, place him behind your king tower and let your elixir build up for a massive push.

This is the ideal part of the game to start using your royal giant. Keep launching aggressive pushes with the hog rider, but now use him alongside the mighty royal giant. You will get one tower guaranteed because these troops will keep doing damage to the opponent’s tower over time. Be careful of playing royal giant and hog at the same time because it costs all 10 elixir so your opponent can easily launch a counter attack and you’ll be unable to defend. I’d suggest doing royal giant and hog one at a time to keep your opponent on his toes and that way he can’t defend with just barbarians or mini pekka. If you already got one tower, start dropping the royal giant in the center on your opponents side to keep doing damage to the second tower. If you have an elixir advantage, drop royal giant on your opponents side and then hog on the bridge. This push will do masssive damage and will destroy the second tower if left undefended. Keep cycling through your royal giant and hog while carefully defending your opponents pushes. You should be able to win 99% of the time with this deck and this strategy. If you are still tied by the final minute, this deck will almost always guarantee a tower, most likely a one crown win. 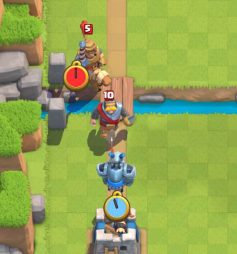 So that is all we have today with this amazing Arena 7 and 8 royal giant-hog deck. Once again, thanks to Flaming Feniks for submitting this deck! Did you know you could earn free gems for submitting a deck? Go here to find out. See you guys tomorrow with more great content!