Hog cycle has seemingly been part of the meta of Clash Royale since the beginning and it still is one of the best decks in the game. This hog cycle deck is only 2.8 average elixir and can be played in almost any arena in Clash Royale! Here’s the strategy and gameplay behind this amazing hog cycle deck!

The main offensive parts of this deck are centered around the hog rider and the two “ice” troops, the ice spirit and the ice golem. Obviously, the hog is going to be the more important of these three, being the main way you are going to get damage onto your opponent’s arena tower. However, you want to use the ice golem and ice spirit to help support the hog as it heads towards the tower. The ice golem can be played in front to soak up damage while the ice spirit will be helpful for freezing any defensive unit that is played to counter the hog. Try to get at least 5 hog pushes in each game you play.

Along with these three main offensive units, you also have 2 great troops for defensive purposes. First up, to be used for defending against tanks, you have the inferno dragon, which can quickly shut down anything from a golem to a mega knight in just a few seconds. For small units and left-over defensive units, guards would be a better option, being able to counter most cards for just 3 elixir. Of course, you can also use the ice golem and ice spirit for defense if you find yourself without another counter.

This 2.8 hog cycle deck is a quality example of the trend towards more spells in a deck. In order to counter log and zap bait decks, we have both featured prominently in this deck. Also, the fireball is included to let you take out medium-health units such as the musketeer and electro-wizard. Between the three spells, you should be able to take out most defensive cards almost immediately.

As I mentioned in the introduction, the hog works best when combined with the ice spirit and the ice golem. Between the three cards, you can get a ton of value for just three elixir. To set up this play, you’ll have to place the ice golem in front, for two reasons. First off, the tower will target it before your hog rider. Second, any troops placed in front of the hog to counter it will have to suffer the ice golem’s death damage.

The hog should be played directly behind the ice golem, pushing it forward to match the speed of the hog. Next to the hog should be the ice spirit, which will offer some time protection when confronted with defensive troops. 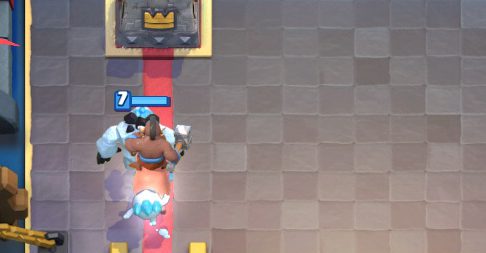 This combo can almost always get at least SOME damage onto the tower, if not many hundreds of HP of damage. You’ve really got to master the skill of quick set-up, which is the key to mastering this deck.

Of course, as with any deck with a high damage spell (rocket, lightning, poison, or fireball), you are going to want to get chip damage with that spell. This doesn’t mean randomly sending the fireball over at an open tower though. When your opponent places a fireballable troop behind the king’s tower, have your fireball at the ready to send across the arena.

By getting a couple of these hits in for each battle, you will quickly build up your damage onto the tower. Remember, only fireball the tower if another troop is walking by, even if you are full on elixir!

Once the inferno dragon finishes clearing a tank, go ahead and start a counterpush. If your opponent is rocking another tank card like the PEKKA or mega knight, the ID can do a long way to helping stop it while still on your enemy’s side of the map.

Now that we know the basics behind this extremely cheap hog cycle deck, let’s talk about the meta in Clash Royale. For any deck to be effective, it needs to be able to beat the current meta decks. Here are two extremely strong decks at the moment and how you can beat them with this 2.8 hog cycle deck.

In a mirror battle, you can easily stop your counterpart from getting much damage onto your tower. The hog rider is a bit too fast to counter with the inferno dragon, so guards are the call. If in rotation, go ahead and throw the ice spirit in there as well to help freeze everything.

As for a completely different deck, you can still counter pretty well. You definitely want to have your inferno dragon locked onto the golem, but you need to distract whatever support units are following it up. This means that the ice golem will most likely have to be used in addition to the inferno dragon. 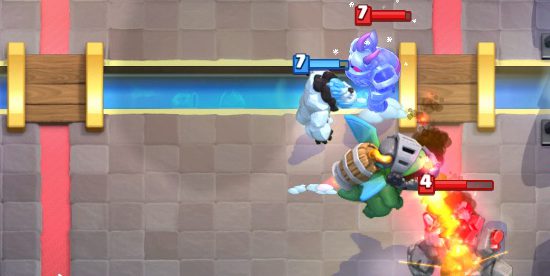 That is going to wrap it up for our hog cycle deck guide. There will be no more “meta deck” posts, but instead we will try to bring you a new deck every 3-4 days, so that you can play the best decks possible in Clash Royale. If you want to vote on what we should do with the website, click here. Thanks for reading and comment below what kind of deck guides you’d like to see!

One thought on “2.8 Elixir Hog Cycle Deck for ALL Arenas”