As we all know, there will be 25 new goblin maps added in the Clash of Clans October 2018 update. The toughest one of these new single player maps is called Dragon’s Lair and the gameplay of Dragon’s Lair has been leaked before the update goes live! Here’s the Dragon’s Lair map, as well as the new giant dragon that comes with it!

Dragon’s Lair will be the 75th goblin map added to single player and will feature inferno towers and eagle artillery within the base. Here’s the entire Dragon’s Lair map. This is obviously a pretty tough map, with 2 eagle artilleries and 8 inferno towers, not to mention maxed out air defenses and archer towers. The biggest discrepancy that you might notice in this goblin map is located at the left side of the base.

That is the Dragon’s Lair, which is why this single player map is going to be the toughest map to beat. Once your troops get close to the lair, the new troop, the giant dragon, will spawn out of it. 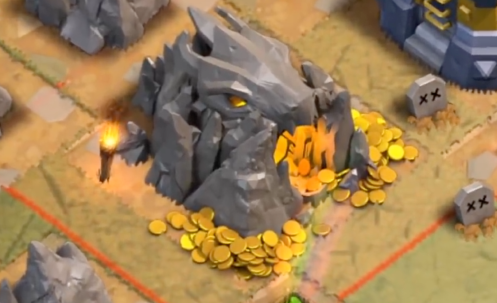 This new giant dragon is definitely the most OP troop in Clash of Clans. This giant dragon can TWO SHOT a maxed out archer queen and one shot just about every troop in CoC. Here’s a look at the troop that will be the defender of the new goblin maps!

You can’t tell by the picture, but this giant dragon is at least double the size of a normal dragon. I really like the gold theme, which goes along with the goblin’s theme of looting gold. This giant dragon triples the difficulty of beating the Dragon’s Lair goblin maps!

This new goblin map seems pretty tough to beat, but I’m sure that some of you Town Hall 12s out there will be able to get the job done. I cannot wait to see what the other goblin maps will all look like. Thanks for reading and comment below what you think about the 75th goblin map, Dragon’s Lair!