Having the best deck at Arena 3 is important to be successful in Clash Royale. Arena 3 or Barbarian Bowl is where you start becoming good in Clash Royale. In Arena 3, the best tank is the giant which is what I have built this deck around. This deck really works great for Arena 3, I hope you guys give it a shot!

The 8 cards for the best arena 3 deck include goblins, spear goblins, giant, valkyrie, mini P.E.K.K.A., fireball, skeletons, and barbarians. This deck features almost all defensive cards, except the giant. You can place any of these cards behind the giant to do some serious damage to the tower!

Defensive Uses for Each Card

Goblins: Goblins are a great 2 elixir troop for distracting big units like the prince or mini-P.E.K.K.A. Place these down to the side of tanky units like these to pull them off to the side and then have the tower also shoot them down. Goblins are also great for taking down a giant as it heads toward your tower.

Spear Goblins: Spear goblins have really similar purposes to goblins in this arena 3 deck. Use spear goblins when goblins aren’t available to destroy the same tanky, big units. Of course, since spear goblins can shoot air troops, they are super good at taking down minion before the minion can lock onto your tower.

Giant: Giant isn’t a very good defensive troop obviously, but he can be used as a distraction. Drop him so that all incoming troops will focus on the giant, and then place some other troops to take out the troops distracted by the giant.

Valkyrie: The valkyrie is by far one of the most valuable defensive cards in this deck. Use the valkyrie to counter any groups of small, low hitpoint troops such as spear goblins, skeleton army, and goblins. The valkyrie can also nearly take out barbarians if played correctly and close enough so the tower can support.

Mini-P.E.K.K.A: More of an offensive unit, the mini-P.E.K.K.A. can still do some serious damage on defense. The best troops to play the mini-P.E.K.K.A. against are the knight, giant skeleton, and valkyrie. Its high damage is able to annihilate all of these troops and still have some health left.

Skeletons: Skeletons are the prefect cheap counter to so many cards. It is cheap to pull over any troop towards the middle of the map so that both of your towers are able to shoot down the troops. Skeletons are best used for destroying the same troops as listed as goblins, like the knight and prince.

Barbarians: The witch is great for defense, especially if you place it at the back of your base so that she has time to spawn skeletons as she walks to the front of your base. The best part about the witch is that she can shoot air units and she does splash damage, meaning she can take out minion horde. 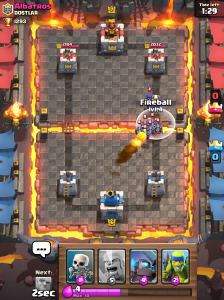 Offensive Uses for Each Card

Goblins: The best way to use goblins for offense is when they are behind the giant warding off any troops that might be thrown in the giants path. If you can get the goblins to the tower, they will do insane damage!

Spear Goblins: Spear goblins, just like goblins are great for putting behind the giant and trying to get to focus on the tower to chip off a few damage points. They are also good put down by themselves to damage the tower a bit.

Giant: Now obviously, giant is the best card for offensive, as your full offensive strategy relies on getting the giant to the tower and protecting any troops behind him. The goal is to get the giant to protect the units behind it by providing a tank. The giant will also do a ton of damage to the tower if it got there.

Valkyrie: Valkyrie is one of the best cards to put behind the giant. The valkyrie is easily able to take out barbarians with the giant as a tank and also any goblins that might appear to counter the giant. Not to mention, the valk does some insane damage if you can get her all the way to the tower.

Fireball: The fireball is best used when to hit the tower without a question. The real bonus is when you are able to hit other troops as well as the tower. The full value comes when barbarians or a witch is played right by the tower and you can take it out with a good fireball.

Skeletons: Skeletons are not much of an offensive unit, but if you play them in with the giant they might be able to defend the giant decently well. Skeletons also do a surprising amount of damage when they reach the tower.

Barbarians: Barbarians are one of the keys to pushing with this deck. You can place them around the giant so that the barbs are able to take out any surrounding units that might try attacking the giant. Also you can push with barbarians alone, just make sure your opponent doesn’t have a fireball sealed up anywhere! 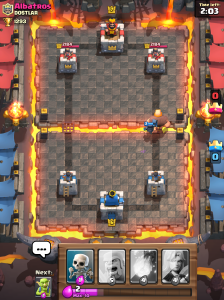 Substitutes for Each Card 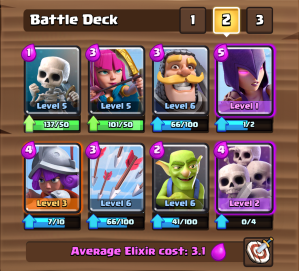 Thanks for reading about this top arena 3 deck focused on the giant! I hope that this can work well for you at 800-1099 trophies. For more great decks and tips for Clash Royale subscribe to us on YouTube: https://www.youtube.com/channel/UCNo3IxCrp34erbCRLmG8HIA