It can easily be argued that the inferno dragon is actually a better defensive legendary card than it is an offensive one. Since it is basically a little, moving inferno tower, it does insane damage against tanks. Here are the best units to play it against!

So basically, any tank is good to play the inferno dragon against. It will absolutely MELT these units, unless a zap is used to “reset” its charge. Even then, it will still do some crazy damage. You usually want to play the inferno tower close to the tower, so that it can start its charge as the tank unit comes closer to your tower. Here are some examples:

To sum up all of the inferno dragon’s defense, you want to play it against tank units and not spam units. Pretty simple!

The whole goal of the inferno dragon is to try and get it to the tower. If you can manage to get this legendary card to the tower, it will do some massive damage and will literally take down the tower. Here’s an example: 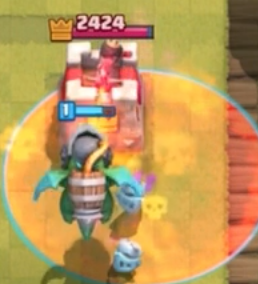 Absolutely insane. Over 2000 damage done and the inferno dragon is only down 1/2 of its health. That’s some extreme Clash Royale gameplay! Anyways, it is probably best to put the inferno dragon behind a tank (lava hound is ideal) along with some troop or spell that can kill cheap, weak units that might be placed down to counter the inferno dragon. Do all that and you will dominate!

That’s all the decks I’ve got right now with the inferno dragon! If you were lucky enough to unlock the inferno dragon, have fun dominating with him as of now. Make sure to check back here tomorrow for new Clash Royale content!