From deep within the first ever Clash Royale special event, the King’s Cup, a deck has emerged out of the ashes. This deck? The ole mirror, miner, muskies, but with a few obvious variations. Lets go ahead and get into the strategy behind this miner three musketeers deck that is killing the meta above 4,000 trophies! 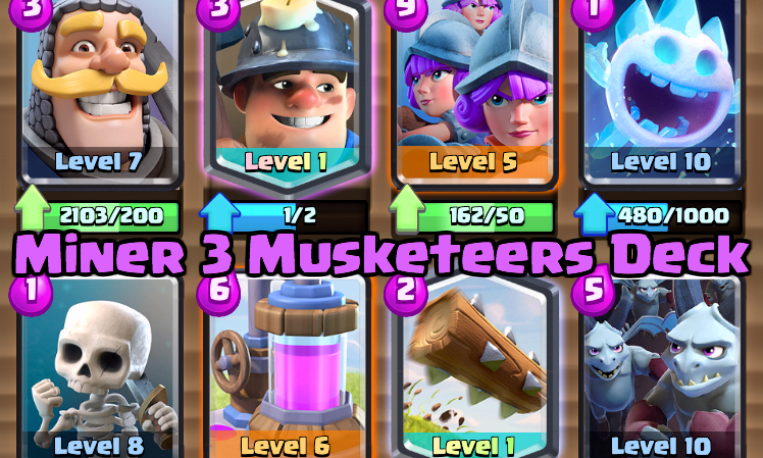 This deck seems very off meta of what we’ve seen over the past few decks. However, this is because there isn’t much of a meta right now in Clash Royale, and this deck has seen strong gameplay as a result.

With an obviously offensive combo with the three musketeers and miner, that leaves everything else to be defensive, besides the elixir collector. You have two easy cycle cards in the skeletons and ice spirit since this deck is so expensive due to the the 3M. Knight is meant to take out any ground troops while you have minion horde for that pesky LavaLoonion combo. Skeletons and ice spirit can help out basically anywhere. Now that you know the basis of the deck, lets go into some more specific strategy.

Since you are rocking the three muskies as your main offensive push, you want to try and bait out your opponents fireball and lightning spells since those are both VERY hard counters to the three musketeers. The best way to bait this out is the elixir collector which is very hard to resist spelling it down. 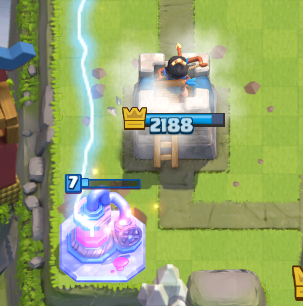 Even if your opponent chooses to fireball or lightning your 3 musketeers, you can still gain a ton of elixir from them choosing the alternative.

So to win with a 9 elixir card, you need to start pumping up from the beginning of the battle. Try to make it your first play if your elixir collector is in rotation so that you can get elixir flowing in. Having elixir collectors up and producing will make it easier to play your expensive cards.

Even if your opponent takes them out, you are still drawing that spell away from the 3 musketeers, which is what you really need to win. Elixir is important, but taking the spell away is even more important with this deck.

To Split or Not to Split?

Splitting musketeers is usually the play to make as putting them all together makes it much easier to kill them. Honestly, either way works, but it depends on what spells your opponents are rocking. If they are packing either a fireball or lightning, then you want to split for sure, so that one spell doesn’t take out the full value. 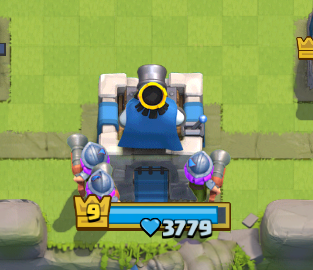 If they don’t have one of those spells, then you are clear to put them all together. This can create huge damage, especially if all 3 are able to lock onto the tower. Just watch out for the spells and you will be clear.

So the main push here is to split your musketeers, that way you have defensive capability along with split lane pushes. While two musketeers make their way down one side, be ready with the miner on the other side.

This combo will force your opponent to protect both sides of the map while practically insuring damage on your opponents tower. Make sure you send the miner in on time and not too late.

How to Counter Popular Combos

As with any deck, you need to be able to play good defense if you want to be able to win! Here are some of the most popular combos in Clash Royale right now and how to counter them using this miner-3M deck.

Bowler Graveyard- Bowler graveyard is one of the easiest combos to counter. First, you want to play knight to distract the bowler (off to the side), while you play minion horde to effortlessly clean up the graveyard.

Golem Baby Dragon- Luckily, you have the minion horde here or else you’d be in a lot of trouble. First surround the baby dragon with your horde and play skeletons on the golem to start chipping it down. Once the baby drag goes down your minion horde will turn and help finish off the golem.

LavaLoonion- This is one of the most popular combos in Clash Royale and has been for a while, but luckily you have the minion horde once again. Just make sure it targets the balloon first and you will be good.

Ice Golem Hog- Lastly, we have ice golem hog which is tough to counter with this deck due to the abundance of cheap units. The ice golem will take them all out when it explodes so you have to play knight. Skeletons can also help a bit. 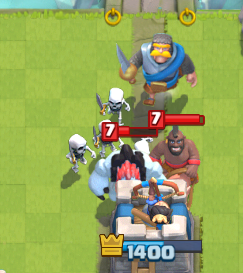 So that does it for our miner muskies meta deck guide! I hope that you guys can use this deck to your advantage right now in our current non-meta. Thanks for reading and come back soon for more Clash Royale content!