It is time for a new rare card rankings for all the rare cards in Clash Royale! We will be having a power ranking, 24-1, of the rare cards in Clash Royale as of August 2018. As many of you know, I have done this ranking before, back in May when there were only 23 cards. The top 5 cards then, in order, were ice golem, hog rider, fireball, giant, and musketeer. Let’s see how much those rankings were shaken up over the past couple balance changes and updates! 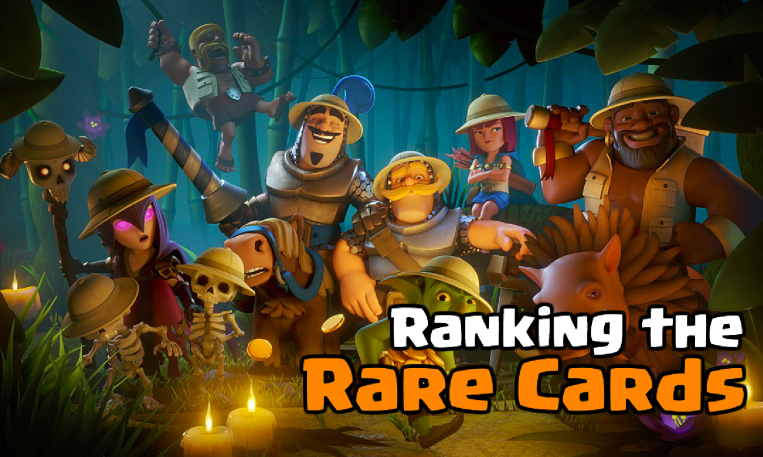 How the Rare Cards are Ranked

When ranking these cards we put a lot of thought and effort into what makes the best rare card the best. We are considering a variety of different ways to rank which are order in importance as follows:

Note: Text color indicates which way the card is trending in regard to the May rankings.

With no surprise, heal is going to bottom out our rare rankings for what seems like about the 10th straight time. The real issue with heal is that the uses for it are so niche that no one can actually benefit from slotting it in their deck during a match. Some small tweak needs to be made, but not enough to make this card OP.

Even with the big rework appearing in the August 2018 balance changes, the bomb tower still hasn’t seen a lot of use. However, I think that should be changing big time, mostly due to the extreme popularity of the royal hogs over the past couple weeks. Look for the bomb tower to become the perfect counter to one of the best win conditions in Clash Royale.

It seems that in these rare card rankings, spawners aren’t going to fare well whatsoever. At the bottom of the spawner rank is that barbarian hut, which actually has a ton of potential. Unfortunately though, for 7 elixir, the barbarian hut can be countered a bit too easily, with one troop being able to take out the entire thing.

Believe it or not, the furnace was at one time the second best rare card in Clash Royale, just one year ago. However, with so many different  splash options in the game now, the power of the furnace has gone down quite a bit. Right now, I think that spawners aren’t in a great spot, and I’m expecting some sort of change to them soon.

To be completely honest, the flying machine isn’t even that poor of a card, but the rare cards are SO strong right now in the current meta, that it slots in at our #20 slot. There are a ton of options with the flying machine and the use of its great range. The problem is that there are a few better options out there for support cards, so the flying machine doesn’t get much love.

Similarly to the furnace, the goblin hut was also the #2 rare card in Clash Royale, but this was only 6 months ago. With a series of nerfs against the hut and the spear goblins, the strength of the goblin hut has been decreased to the #19 ranking for rare cards. There are still some solid goblin hut decks out there, but again, there are better ways to win.

The tombstone is going to be the biggest dropper in this edition of the rare cards, falling 5 spots from #13 down to #18. With the cannon and tesla being a bit better as defenses, it leaves the tombstone to get the majority of its play as a spawner. However, with the skeletons not being able to touch the tower, the threat is limited.

Nothing can beat the range of the dart goblin, except a whole bunch of beefed up rare cards. This card is an extremely solid option in most decks, especially log bait or hog cycle decks. The ability to shoot both air and ground units from a distance for only 3 elixir is often the reason the dart goblin is played in a couple decks.

The main reason that the mini-PEKKA is falling in these rankings is that the valkyrie is way too good right now for any competing cards to have much usage. I’m still a really big mini-PEKKA fan, so its not great to see him suffering a tad in the current meta. However, once the valkyrie gets toned back a little back, the mini-PEKKA should be able to climb.

The one thing that is really helping the elixir collector right now is the popularity of the three musketeers, which brings in the pump as a bait for any large spells. But, with the fireball and poison spells at an all-time, it makes it tough for the elixir collector to actually be used as it was meant to, as a way to gain a big elixir advantage.

If you have been keeping track, you might have noticed that this is the FIRST rare card that has trended up since May. The battle ram, which has never really been my favorite win condition, has really been moving up lately. The heavy use of cycle decks fits the battle ram in perfectly, as a secondary win condition or a bait for the hog/royal hogs counter.

If it were for the meteoric rise of the valkyrie, zappies would definitely be the biggest success story of the rare cards. When first released, the zappies were a complete joke, but now, as the brief royal recruits meta showed them off, zappies are fitting in perfectly well with other split push cards like the royal hogs and three musketeers.

As always, rocket maintains a solid place just in the top half of all rare cards. While fireball and poison are far and away the better options right now, no card can match the rocket’s pure power and ability to take out more than half of the troops in Clash Royale. Rocket will continue to stay up here, as long as an alternative isn’t introduced.

The only problem with the three musketeers is that you need to have a deck that centers around them in order to win. Despite that, the three musketeers are now one of the most popular win conditions in the game, especially now with the royal hogs being such a good card to combine with them. Split pushes are the future of Clash Royale!

It’s been a while since we’ve seen the musketeer this low in the power rankings, but 9th is still a great ranking for a support card like the musketeer. It seems as if the wizard and witch have become more popular support options behind the giant/PEKKA pushes, leaving the musketeer as a still decent support card for random decks.

One of the most traditional win conditions in Clash Royale, new power houses like the royal hogs have made the giant take a slight step back in the meta. Still, the giant is played quite a lot as a smaller tank than the golem and PEKKA. This big guy still packs quite a punch, especially with the improved witch right behind him!

With cycle decks at an all-time high, it should be no surprise that the ice golem is still ranked pretty high, even with a 5% hitpoint nerf back in June. The best thing about the ice golem is that he can help your towers take out a whole range of units by distracting them into attacking it instead of your towers!

Royal hogs are going to make their debut as the 5th best rare card, but it wouldn’t have been this way a month ago. When first released, the royal hogs were not that great of a card, but it seems that the recent buff to them in the August balance changes have made them a lot more popular as a split push card that can deal some serious damage.

The wizard is going to crack into the top 5 for the first time ever in these rankings, as splash really has to reign supreme in order to shut down minions/minion horde and other cards. The wizard can also fit into a whole bunch of different decks, making it easy to slot him into any deck and have him be amazingly successful.

Besides zap (and maybe log), the fireball is the most popular card in Clash Royale. The wide range of units that rank in the top 10 of our rankings that can be taken out with fireball (wizard, musketeer, three musketeers, electro-wizard), make the fireball one of the biggest go-to spells in Clash Royale at the moment.

While it seems that royal hogs are fast approaching the original hog rider in popularity, for now, the hog rider stays ahead in our #2 ranking. This card is still one (if not the best) of the best win conditions in Clash Royale, being the forefront of all cycle decks and having a ton of different deck types revolve around him specifically.

And to no one’s surprise, the valkyrie is going to go up SIXTEEN spots from #17 to our #1 ranking for rare cards. The valkyrie has been completely ridiculous, dominating in every different arena. Her rise to power came in the June balance changes, giving her improved hitpoints and an increase in first attack… expect a small nerf soon!

So that is going to wrap it up for our rare card rankings for August of 2018! Stay tuned soon to see our epic and legendary card rankings soon. Thanks for reading and comment below what you think of the rankings!