Arena 11 or the arena above 4000 trophies has been leaked in the Clash Royale March 2017 update! This new arena was leaked in Ash’s latest video, which you can watch below. I pulled all the leaks that point to Arena 11 listed below. This will probably be the latest Clash Royale sneak peek tomorrow!

First up, I found the new arena in the battle button for multiplayer. It obviously isn’t one of the preexisting 10 arenas, so it must be something new.

This is what hovers above the battle button. I don’t know what the bronze shield is, maybe it is like bronze, silver, and gold leagues in Clash of Clans? It looks like a mix between Legendary and Royal Arenas.

So after I spotted this in Ash’s video, when he was going through Bandit challenge rewards, this popped up.

This isn’t photoshopped, it clearly said Arena 11 in the video. Obviously, Arena 11 doesn’t exist right now so it must be coming in the March 2017 update! Chest rewards will most likely be different than what they are in Legendary Arena.

Lastly, we have a view of the new Arena 11/4000 Trophies arena itself! Here is the gameplay of Arena 11 when you would be in a battle: 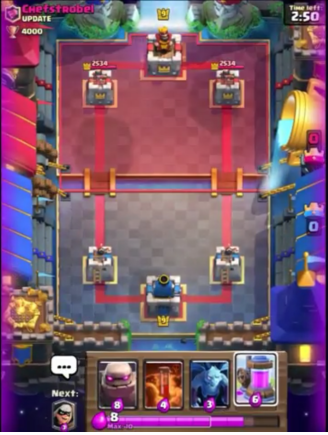 It has a really strange purple tint to it, but as I said above, it looks like a mix between Royal and Legendary Arenas, even in battle. I think it looks super sick, let me know what you think about the looks of the new arena.

That’s going to be in we have on Arena 11, but it is quite obvious that we will be seeing Arena 11 within this March 2017 update! Even more sneak peeks will be coming tomorrow, so stay tuned. Thanks for reading and comment below what you think of Arena 11!