The main two win conditions here are going to be the mega knight and the miner. The mega knight is going to be geared more towards beatdown pushes, while the miner will be chip damage. With the mega knight, you want to deploy him on defense for the damage, and then start up a big counterpush to make the most out of him. On the other hand, the miner combines well with poison as a purely offensive card. A few hits from the miner can translate into a couple hundred hitpoints of damage.

Along with your two offensive cards, you also have 3 wonderful support cards to help you get to the tower and defend yours. First up, the inferno dragon is going to be mostly an offensive card, used to wipe out tanks like the golem and giant. Bats are great for defense, mostly for taking out small units like the musketeer, knight, and inferno dragon. Lastly, we have the skeleton barrel, which is purely a support card and has next to no  value on defense. Send in this baby along with a tank to force your opponent to try and overcounter.

Finally, we have the goblin hut and your two spells. The goblin hut is extremely important in this deck, serving as both a defensive building and a way to get chip damage on the tower. Zap is a great card to have in any deck, allowing you to clear away counters like skeleton army, bats, and goblin gang. Lastly, we have the poison, your high damage spell for killing a wide array of troops that might be placed to defend against your miner or mega knight. Use of these three cards is the difference between winning and losing with this deck!

Goblin Hut on the Rise

Ever since the mega knight was released into Clash Royale, the goblin hut has been on a mission towards the top of the meta. It synergies perfectly with the mega knight, adding a deadly combo into the mix. With this mega knight-goblin hut, you should be able to get a bit of chip damage as well as build up for a big push.

Remember, the goblin hut can act with two different purposes within this deck. First off, it can be pure chip damage; producing spear goblins that slowly take off health from your opponent’s tower. Or, you can use the goblin hut as a defensive building, having it pull defensive-seeking troops like the hog rider or giant towards it instead of your arena tower. Depending on your opponent’s deck, you can use either of these strategies for high success.

One major part of this deck is perfecting the miner-poison combination. If you have 7 elixir and are willing to commit to defend a counterpush, the miner-poison push can be a great way to chip down a bit of health off your opponent’s tower. Most of the time, the miner is countered by small, relatively weak units. With the poison, you can kill these troops almost as soon as they are placed down, allowing your miner to do that much more damage onto the tower. Also, the poison does a fair amount of damage, adding to your overall total and helping take you gain the crown. 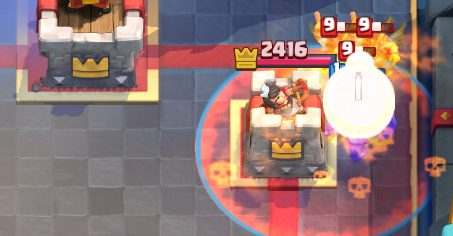 The other side of this deck that you need to perfect is the mega knight beatdown push. The miner chip combo is a great way to get small damage onto the tower, but a push led by the mega knight is how you actually take the tower down. It’s best to build up a beatdown push once double elixir hits.

Really, any card in this deck synergies well with the mega knight, but I would suggest supporting it with the skeleton barrel and inferno dragon if you can. The skeleton barrel will force your opponent to counter swarm as well as a tank, while the inferno dragon is great for taking down healthier units like the knight and executioner. If you have the elixir and the cycle, the poison spell would also be a great mix to throw in, letting you kill any weak units that your opponent might use to overwhelm your push.

Now that we have the basics of offense with this mega knight-goblin hut deck down, we need to focus in on defense. Every single deck in Clash Royale features a tank card, whether it be the golem or the knight. The inferno dragon is going to be critical for taking these units down, as well as providing a distraction for any support units behind the tank. With the inferno dragon, you can shut down the front runner of big pushes and make it much easier to kill the support troops!

And with that, we are going to wrap it up for this week’s edition of the most meta deck in Clash Royale! I hope that you guys enjoyed this article and can use this deck to help you win out there on the ladder. Thanks for reading and comment down below what deck you are currently using in Clash Royale!