While it was almost a guarantee that the royal ghost was bound for a nerf, Clash Royale confirmed it with a tweet responding to a question about the next balance changes in the game. Here are their replies to the tweet. 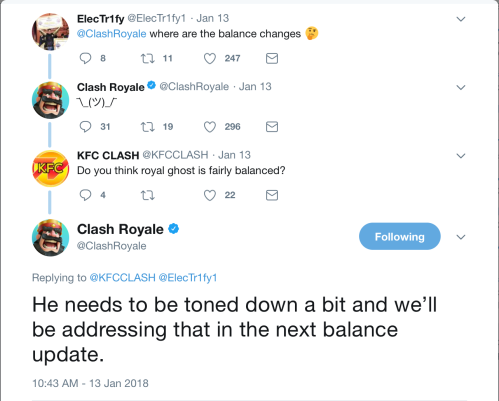 The two pieces of the puzzle are there: he will be “toned down” and it will be “in the next balance update”. However, what changes could they make to the royal ghost in order to make it a lot less OP? Here are two of the best solutions from my head.

While the royal ghost is surely the focus of these balance changes, there will be other cards nerfed and buffed. Here are the cards that I think deserve a balance in the next update.

There are a lot of cards that are considered OP and weak right now in the Clash Royale meta. Here are my wanted balances and nerfs for the January balance update!

I hope that you guys agree with all of my ideas! We know that the balance update is coming pretty soon, since Clash Royale wouldn’t leak it like this unless it was less than a week away. We should see these balance changes live sometime within 10 days, I believe.

So that is going to wrap it up for this pre-balance changes article. I know that you guys are ready for the royal ghost to be nerfed! Thanks for reading and let me know what other cards you think should receive a change in this balancing update!