There are two main ways to form your night witch army composition at Builder Hall 6. First off, you can go pure night witches and fill all 4 of your army camps with night witches (8 overall) and use your battle machine as your only tank. This is a risky strategy, but can pay off big time if your night witches do what you want.

The other option you have is to fill 3 of your army camps with night witches (6 overall) and bring boxer giants in your last army camp. This will offer your night witches a lot more protection and allow you to distract defenses easier. However, you won’t have nearly as much firepower since you’ll be missing 2 night witches.

It really depends on personal preference, since both army compositions work great! For the purposes of this guide though, we will be using the composition with all night witches!

Planning your Attack with Night Witches

Now that we know what to avoid, let’s go ahead and check out the base that we will be attacking in this strategy guide.

The clear place to attack from would be the top left, since you would almost guarantee the quick one star, and the second would most likely follow. However, it might be concerning that the multi-mortar and roaster are protecting the Builder Hall. This is actually GOOD for your attack though….

You can use your battle machine to distract both of these defenses before they target your night witches. Distraction of defenses is the best way to certify success in a night witch attack. Whenever you can, use your BM to take the fire from the multi-mortar, roaster, or giant cannon.

Firecrackers and air bombs aren’t a big concern for night witch attacks because bats can be respawned so easily. It is much more important to pay attention to when the ground defenses are located.

So now that we know we are going to attack from the top of this BH7 base, let’s go ahead and run through how exactly to attack with the night witch strategy!

First off, the probability that they get blown up by a mega mine right off the bat is low, since not many people put their mega mines in the corner of their base. Second, the night witches will spawn many waves of bats before they reach the base, giving you a lot of extra firepower to help out your battle machine.

If you can, also try to distract the roaster and other ground defenses. Eventually your battle machine will go down, but hopefully you created enough time so that your night witches have built up a lot of momentum with their bats. Here’s the optimal placement for the battle machine against this base.

Once you play your battle machine, the versus battle is pretty much out of your hands, since there are no spells or back-up troops in Builder Base or in this attack strategy. However, you can use your battle machine to help distract the trio of cannons away from your night witches. In this base, all of the cannons are resting in the bottom of the base. 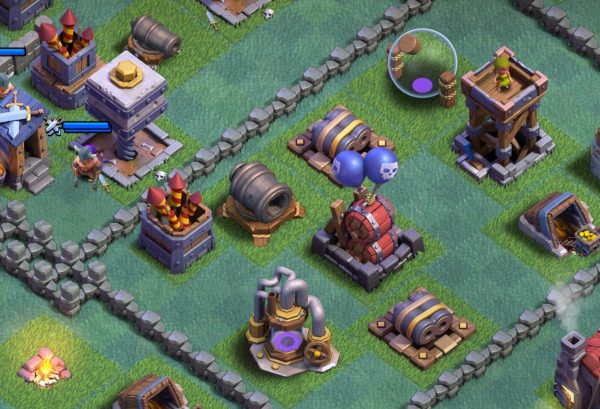 The whole strategy here is to use your battle machine’s ability to get the max amount of health from it before it goes down. You want to have your night witches in and destroying these cannons before your battle machine dies. If the BM has minimal damage to its health and is nearing the cannons, save the ability until he actually gets near to them. This way, you’ll be able to add extra protection to your night witches against 3 different defenses that all critically can damage your main win condition.

And that is going to wrap it up for our night witches attack guide at Builder Hall 6. This is far and away the best attacking strategy for versus battles at BH6 in Clash of Clans, so upgrade those night witches fast! Thanks for reading and comment below what attack strategy you would like to see next!

One thought on “Night Witches Attack Strategy at Builder Hall 6”