Hey guys; STL here with a helpful post! Clan wars are one of the biggest parts of Clash of Clans, so you need to know how to win in war! Actually a lot of victories are made in Preparation Day, not Battle Day.

Scouting the base you want to attack is probably the most important part of Preparation Day for Clan Wars. Here’s a step by step guide of what to do when you first look at the enemy bases:

1. Scroll through all the bases and make sure to notice details, such as air defense locations and the mode of the Inferno Towers/X-Bows. Seeing these will decide what strategy to use.

2. Focus in around your equal base (if you are 17, your equal is 17). A general rule is attack within 3 of your equivalent base your first raid.

3. Know your strengths. Look through all 7 of the bases around you, and decide which one would be the easiest to three (or two star in high level wars) using your specific skills. For example, if there is a base with centralized air defense, X-Bows on ground mode, and you are an amazing GoWiWier, you should realize that is your base to attack!

4. Look closer at the base. Notice the 2×2 squares where teslas and giant bombs are. Also, plan the number of units you will use. If we keep going with the example of GoWiWi, will you use 2, 3, 4, or even 5 golems? This should all be decided on Preparation Day.

Those are 4 key steps that shouldn’t be skipped. Following these and taking care in scouting the base you will be attacking can be the difference between a one-star and two-star.

The red circles represent where teslas or giant bombs could be located.

Communicating with Your Clan

Communicating in key in Clan Wars. By talking to your clan during Preparation Day, you can earn a few extra stars just by planning more. You can use Clan Chat, but if you want to be more serious, these Apps can help:

These apps can help your clan talk more strategy. By communicating with your clan, they can help your plan attacks. If you have a skilled GoWiWier in your clan, go to them for some tips before you raids. Also the big part is planning attacks.

Wouldn’t it stink if you went through all that trouble to plan an attack and train troops and then another player attacked that base before you? During Preparation Day, you can talk to others around your level, telling them that you will take out 17, for example. This will prevent mishaps, and make war run much smoother. Communication can also be used for planning troop donations to war castles…. 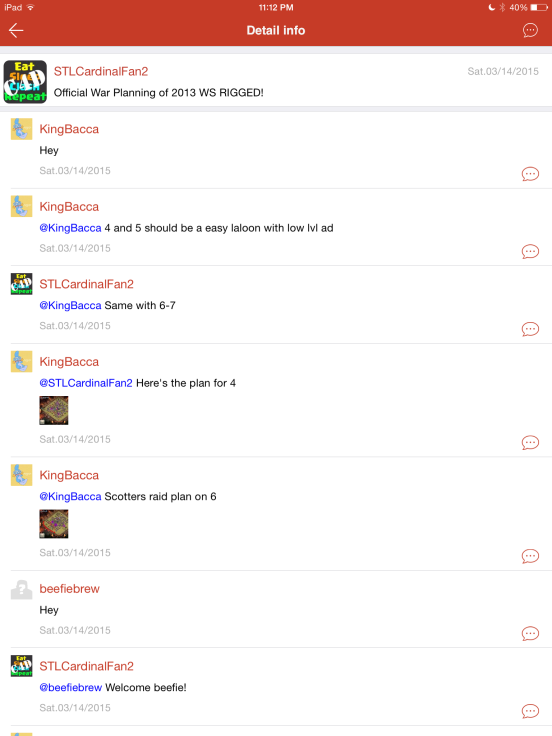 An example of Clan Wars Assist for Clan Wars

Troops in the war castles can turn the tide of a raid like THAT. Therefore, it’s critical to have the best possible troops, that work the best for YOUR bases. If your base doesn’t support witches, don’t ask for them! Here’s the most popular donated troops

Now each of those units has it’s own unique strength. You need to know your base well enough to realize what troops you need to defend! Also, train troops to donate to other war castles, but only if you have what they have requested.

So that’s about it guys! Thanks for tuning in here to find out a lot more about Clan War Preparation Day! If you follow the Preparation Day steps, you can become an expert war clan! Simplest step: stay organized! See you later, Clashers!

One thought on “Owning Preparation Day in Clan Wars”