The dart goblin was released into Clash Royale a few days ago and by now, most of you should have enough of it to use it effectively in ladder play. Today, I’ve got some great decks for you guys featuring the dart goblin, along with some strategy for the newest Clash Royale troop!

The dart goblin is a great card to have on offense, as long as he is behind a tank of some sort. While the dart goblin can do a ton of damage unchecked, he doesn’t have much health. Personally, I think the best push is with a giant, since the giant has a ton of health and is cheap enough to have other units in with the dart goblin.

Along with the giant, another great tank to pair the dart goblin with is the royal giant. The RG and DG ranges are the same so they will be a pair of shooting aces!

For pushes with both the giant and royal giant, the dart goblin is nice because it is able to pick off popular troops used to counter the two, such as minions, mega minion, and goblins.

Of course, along with big tanky units, the dart goblin also fits nicely into the popular zap bait decks. While the dart goblin can’t be zapped, he can be logged, which might make a good bait for your princess or skarmy. The dart goblin works extremely well with the miner-goblin barrel combo since it can clear minions, goblins, and spear goblins very fast. 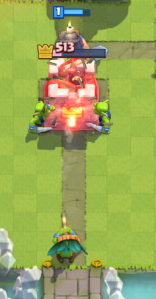 These are mostly combos that the dart goblin work well with. As a pure offensive unit he isn’t great, but he is very good as a support to clear swarm troops from taking out your main push. He also does a bit of damage if he is able to lock on the tower!

The dart goblin is definitely much better on defense than he is on offense. The best thing about the dart goblin is the ability to opposite lane push after you are finished defending. Take this example with the mega minion:

So after the dart goblin finishes up the mega minion, he will turn towards the right arena tower. Why? His range is so long that you are able to plant him on the other side of your base and still have him hit the wanted target. Be careful though, only one spot to either side of the base will work like this.

Along with the mega minion, the dart goblin can also defend very well against minions, goblins, skeleton army, spear goblins, and the graveyard.

One of the best things about the dart goblin is his range though and you want to make sure to use it effectively. You may have noticed 😉 that the royal giant will outrange all defenses. Well, the dart goblin will do the same thing! The newest goblin is great for taking out the popular tombstone and furnace from a safe distance away. Also use him to snipe away defenses before placing your defensive-targeting unit!

How to Kill the Dart Goblin

Lastly, we get to how to kill the dart goblin. If the dart goblin isn’t behind a tank unit, then you shouldn’t worry much about him since he will do, at max, 600 damage to your tower. However, to kill him behind a tank, there are many different options.

The easiest way to kill a dart goblin is a quick log. Be careful though; your opponent might have a princess and was trying to bait out your log from your deck.

Also, most 3 elixir units can take out a dart goblin if dropped right on top of him. These units include knight, minions, skeleton army, and guards. Perfect for a positive elixir trade and to keep working on destroying the tank in front!

This video was made by Orange Juice on the very technical aspects of the dart goblins that I can’t really cover in words and pictures. Enjoy and leave a like!

Thanks for reading and I hope that you guys are able to use the dart goblin to its full effectiveness. It really is a solid card and I hope that we see it in the meta soon! Try out these decks if you have a high enough level DG.