The latest sneak peek for the Clash Royale December 2016 announced that there would be 4 new cards added to Clash Royale, the Dart Goblin, Executioner, Goblin Gang, and Battle Ram. In this article, I’ll be going over all 4 new cards and what they will be in the game.

The dart goblin is going to be a three elixir rare card that is similar to a long range, more damage spear goblin. Here is the dart goblin card as it will appear in Clash Royale.

Personally, I think that this will have a great place in Clash Royale as a weaker alternative to the princess. While the princess has longer range and does splash damage, they have the same health and the dart goblin shoots MUCH faster. Here’s a picture of the dart goblin in game.

Honestly, pretty neat design and I think that it will be a cool addition to Clash Royale for all those players who don’t have the princess.

The Executioner will throw its blade in the air, killing both air and ground troops. The blade will then turn back, making a second hit on whatever troops are there. Basically, picture a boomerang monkey from Bloons Tower Defense. Here’s a look at the Executioner in the actual game.

Once again, this seems like it will be a sweet card and definitely find a place within Clash Royale. It’s a great way to kill spam units and any troops behind a tank.

The Goblin Gang is exactly what it sounds like, a gang of goblins! The Goblin Gang is consisted of 3 goblins and 3 spear goblins. The GG will be a common card costing 3 elixir. Here’s a picture of the new card: 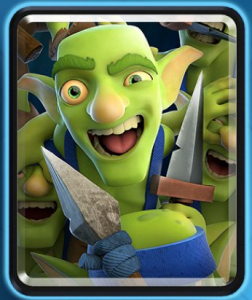 The Goblin Gang seems like such a sweet card which will work extremely well in zap bait decks. Here’s a glimpse of all of those goblins when this card is placed down:

So personally, I like this card a lot and enjoy that we will be having 2 new goblin cards in Clash Royale. Hopefully, it won’t be dominated by the zap spell.

The last new card for the Clash Royale December 2016 update is the battle ram, which looks like the best of the 4 cards.The battle ram will cost 4 elixir and be a rare card. The new card will be a battering ram that heads towards the closest defense that drops 2 barbarians after they make contact. Here’s a pic of the new card:

I really like the design as it looks sort of like the log carried by two barbarians. Anyways, I think that this card will be used a lot to take out buildings because it is an alternative to spells. Here’s a pic of the battle ram charging!

That’s all the new cards and I think that Clash Royale has done an amazing job thinking up great new cards to add into the game. The update looks to come out soon, make sure to check back here everyday for more December update news!