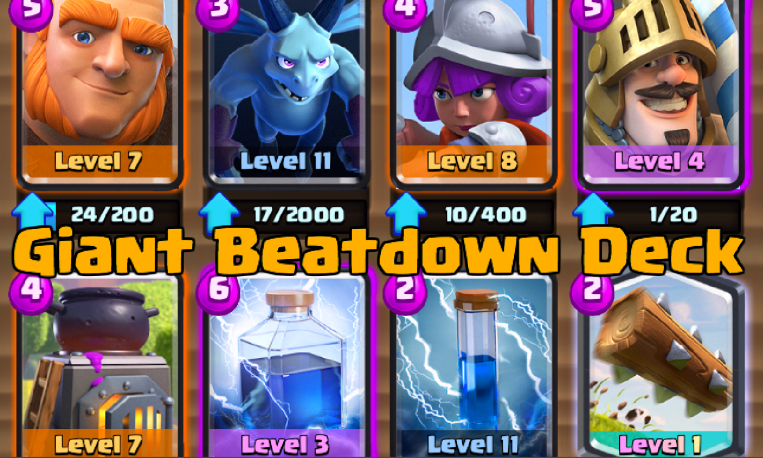 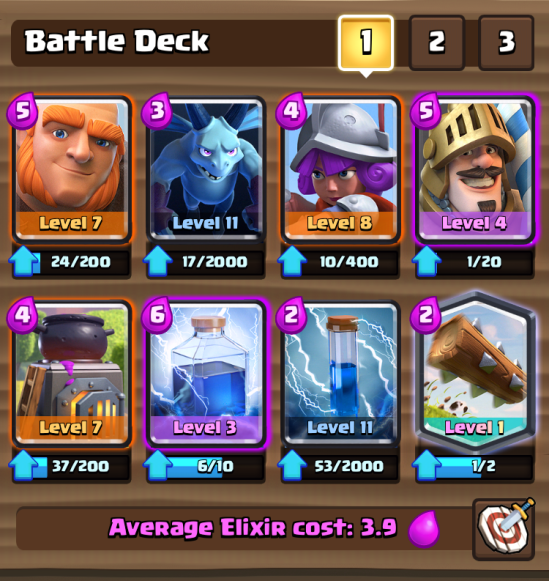 So as with all beatdown decks, you want to build up a huge push using the giant as your main tank. You always want to have the giant in the front and load up cards in behind him! The minions and musketeer are both support cards, they can be used on both offense and defense. Ideally, you want to try and get at least one of these in behind the giant during your big beatdown push. The prince is mostly going to be an offensive unit, used along side of your giant.

Spell and defense-wise, we have the furnace along with 3 spells, the lightning, zap, and log. Furnace is super important here because it provides splash damage to minion horde and skeleton army which are popular counters to the giant. Also, furnace is great to defend against hogs and giants. Lightning is critical; it allows you to take down musketeers, wizards, and mega minions placed behind an arena tower. Also, you can use the lightning to take down inferno towers played against your giant. Lastly, we have zap and log which are two very versatile spells that can let you defend against any swarm units played against your push.

Getting a Furnace Down

One of the reasons the furnace is one of the best cards in Clash Royale right now is because it gives slow trickle damage onto your opponents tower! Placing it immediately, hopefully as your starting play, will start that damage early and force your opponent to make a move or risk getting 1000 damage chipped off his or her tower!

The best place to place your furnace is in the center of your half of the map, a couple spaces in front of the king tower. This will make the furnace act as a defense, as well as prevent it from being rocketed down along with your tower.

While a big giant beatdown push is what really wins this game, getting lightning chip damage on your opponent’s tower can make it much easier to get the win! At level 4, tournament standard, a lightning deals 346 damage to the tower. That means with 8 lightning spells, you can completely take down an arena tower! Obviously, you won’t able to get 8 down, but doing 2-3 will offer a ton of damage.

Now, you don’t want to just straight up lightning spell the arena tower. Wait until your opponent plays a card in the back that can be lightninged down like the wizard or musketeer! This will take out that unit, plus give you some damage on the tower.

So now that we’ve talked about two ways to get some chip damage, let’s discuss the real meat of this deck, the giant beatdown push. If you do it correctly, you should be able to take the tower in only 1 push. Let’s talk about the steps for setting up for this massive beatdown!

1. Set Up with the Furnace- To begin your push you need the constant stream of fire spirits to try and ward off any defensive troops played. Having the furnace down early will also stop a quick offensive push by your opponent.

2. Drop the Giant in Back- Once you reach 10 elixir after you’ve played your furnace, drop your giant in the back behind your king’s tower. In the time it takes to walk forward, you will build up enough elixir to play a bunch of support units.

3. Support Units in Behind- When your giant hits the bridge, its time to start stacking support units. I’d go with the prince first, since his speed can make the giant reach the tower faster, followed up by some minions.

4. Spells at the Ready- You can’t expect that your push will go uncountered. If it does, your opponent probably quit! Therefore, you need to have spells ready to go to take out defending units. I’d recommend hovering zap over the push since that is the most versatile.

Like I said before, one push should be enough combined with your lightning and furnace chip damage. Just be ready for the defensive play in troops and you’ll reach the tower!

Despite at how great at offense this giant beatdown deck is, you still need to know how to counter the most popular decks and combos with Clash Royale at the moment. Here are 4 of the most popular combo right now and how you can beat them with this deck.

Giant Prince Beatdown- Since this deck is the most meta deck at the moment in Clash Royale, you will have to be able to counter it! This is pretty easy to beat; furnace to distract the giant with minions and musketeers to clean up and start a counter push. 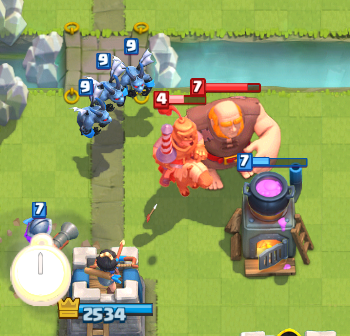 Ice Golem Hog- The ice golem hog combo has been strong for quite a while, but with this deck it is beyond easy to counter. You lose one elixir, but minions plus furnace easily takes out this whole combo.

Golem Beatdown- Along with giant beatdown, golem beatdown is super strong with the baby dragon. Again, you want to pull the golem with the furnace while you pop in musketeer and minions on the baby dragon, which will eventually take out the golem too! 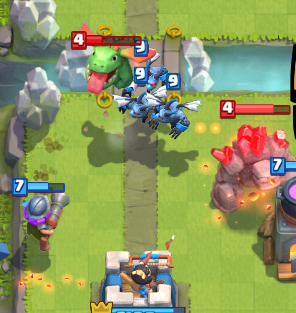 LavaLoonion- Finally, we have the king of combos, appearing on every one of the Most Meta Deck articles. Since you have minions and musketeer, this is pretty easy to beat, but you’ll need a furnace to pull the balloon along with those two troops. 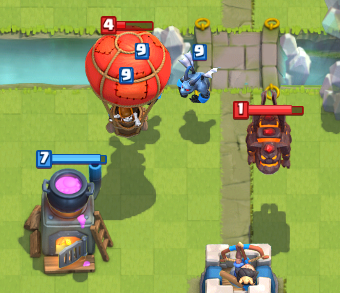 So that is going to do it for the most meta deck #8! I hope that you guys can use this deck well on the ladder and at least gained a bit of insight into the meta in Clash Royale at the moment. Thanks for reading and comment below what deck you are using right now!