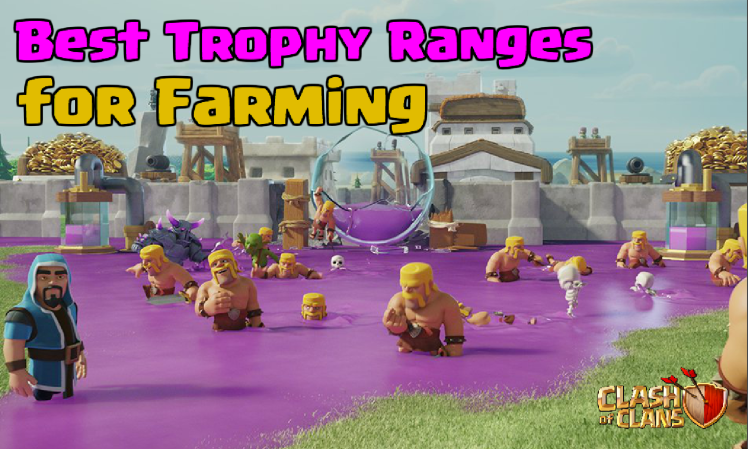 So before Town Hall 7, it is really hard to define farming since all the updates are relatively cheap. Also, those guys are just trying to push up as high as they can since resources aren’t as important.

For Town Hall 7, upgrades are still pretty cheap, with most upgrades costing less than 1 wall at TH9. Gold 2 and 3 will offer you the best availability for collector raids, especially for hitting TH8s. At Town Hall 7, you should be using barch strategy to get all of the loot out of collectors!

In my opinion, Town Hall 8 is the pinnacle of farming for all of Clash of Clans. Your troops are high enough level that you can dominate low leveled TH9s, while you can still get a ton of loot on TH7s. Again, you should be using barch as you can pick off TH7s, TH8s, and TH9s in Gold 1. Don’t be afraid to go up to Crystal III to get that DE win bonus.

Right now, I’m Town Hall 9 and loot is absolutely insane for collector raids in Crystal II. Once you hit crystal, you start gaining dark elixir for winning battles, and with heroes getting up to 150k for an upgrade, DE is much needed! Make sure to hit these collector raids with barch and use your heroes to gain the 50% win!

So for the last three TH levels, I’ve said to use barch as your attack strategy. However, once you hit master for farming as a Town Hall 10, its going to get kind of hard to win using barch. Consider switching to LavaLoonion or giants to not only take out collector villages, but also raid storages for huge loot gains.

Last but DEFINITELY not least is Town Hall 11! Once you hit TH11, it is nearly impossible not to go into champs just by winning defenses, but that is good because loot is there! At TH11, barch is basically useless, so personally I’d go for LavaLoonion. You’ll have to do storage raids, but with LavaLoonion you will be getting the win bonus with a 100% certainty. This win bonus is no joke at 200k a piece!

So that does it for our quick guide on farming leagues for all TH levels! I hope that this helped you guys realize where to go in order to get the most loot possible Thanks a ton for reading and comment below what league you are currently in, pushing or farming!