Rascals will be the 84th card added to Clash Royale, and the first common card since the skeleton barrel way back in October. Like most common cards, the rascals won’t be a win condition, but instead will be a support or defensive card.

The rascals card consists of three troops, one boy rascal and two girl rascals. The boy rascal has significantly more health than the girl rascals and acts as a tank for the other two.

Based on the current “Coming soon” section of Clash Royale, we can assume that the rascals release date will be on May 25th, 2018.

Rascals will cost 5 elixir and will first be available for unlock in Arena 9, Jungle Arena. This will give the majority of Clash Royale players the ability to unlock the rascals pretty early on. Now let’s talk a bit about the specifics behind the rascals, specifically their stats and use in Clash Royale! 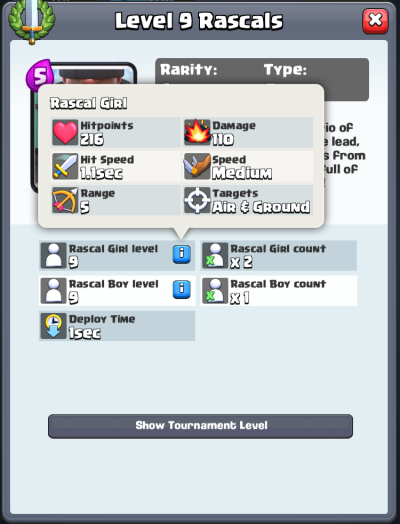 Let’s go ahead and compare the rascal girl stats to some of the cards that are already in place in Clash Royale. This way, you can get a clear understand of what all the numbers mean!

If you were to compare these rascal girls to any other card, they would most be like the dart goblin. Rascals is certainly going to add to the log-bait meta, as this is yet another card whose best counter will be the log.

Remember, there are two rascal girls while there is only one rascal guy. Let’s take a look at the statistics for the solo rascal boy!

Basically, based on these statistics, the rascals will be a card with a knight with two dart goblins in behind. Of course, this is going to fit in well with log bait decks, but we will have to see exactly where the meta takes this new card in Clash Royale.

I’m pretty excited for the release of the rascals, which should be coming either this Friday, May 11th, or next Friday, May 18th, in a special Rascals card tournament. Thanks a lot for reading and comment below what your first impressions are of the rascals and the value they can bring to Clash Royale!

12 thoughts on “Rascals Statistics and Release Date in Clash Royale”