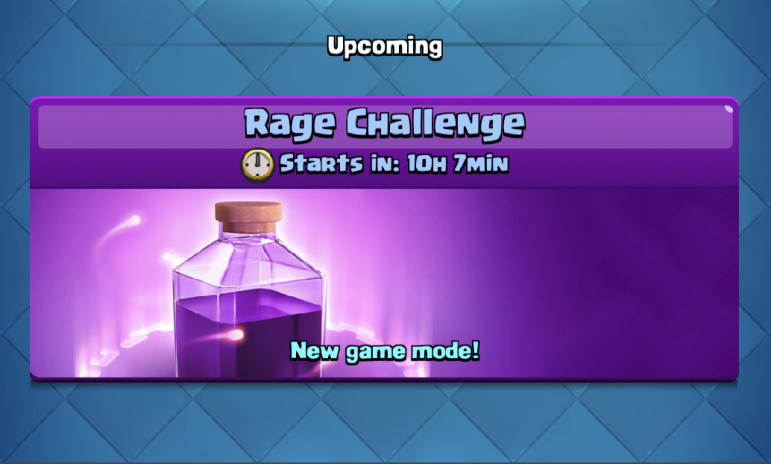 Best Decks for the Rage Challenge

Since there is an infinite rage spell over the entire map, you need to build decks around cards that can severely increase damage through the rage spell. Basically, the best deck archetypes to use are going to be those that pair well with the lumberjack. Beatdown decks will probably be the best decks in this challenge, while zap/log bait will no longer be as effective. Here are three decks that should take you pretty far in this rage challenge!

As many people know, this golem beatdown deck is absolutely devastating when the lumberjack dies and the rage spell is dropped. In this gamemode, you will have a constant rage spell filling your golem, night witch, and mega minion. The lumberjack’s rage spell in this challenge is useless (rage spells can’t stack), but using him as a defensive unit works pretty well! Build the beatdown push like usual, but be mindful that your golem will move faster than you are used to.

A huge secret to this rage challenge is that the rage spell will constantly be enhancing the elixir collector, which means you will be constantly pumping out elixir at an astonishing pace. Since you are carrying the three musketeers, the elixir collector will be super helpful, since you’ll have enough elixir to constantly afford it. The best part about this deck though is that so many high damage cards will be able to deal that damage even fast, thanks to the rage spell being applied constantly.

Our final deck for the rage challenge is this cheap double hog cycle deck. The rage spell will be great for pulling your hog and the royal hogs to the tower even quicker, making it tough for your opponent to come up with a counter in time. With such a cheap deck, you should be able to cycle back to your two main win condition several times, making for many, many hits upon the tower. Just be weary of uncountering, as cycle decks are usually played…. that won’t work in this challenge!

And with those decks, I hope that you guys are able to get 12 wins in the rage challenge and can get that free legendary chest. Just be sure to counter troops more heavily than you usually would since the rage spell will give them that extra damage increase. Thanks for reading and comment below what you think about this new type of challenge!