It is time for a new epic card rankings for all the epic cards in Clash Royale! We will be having a power ranking, 24-1, of the epic cards in Clash Royale as of May 2018. As many of you know, I have done this ranking before, when there were only 23 epic cards. The top 5 cards then, in order, were golem, tornado, PEKKA, executioner, and poison. Let’s see how much those rankings were shaken up over the past couple balance changes and updates!

You can view the old ranking here: https://clashfordummies.com/2018/02/22/clash-royale-epic-card-rankings-february-2018/ 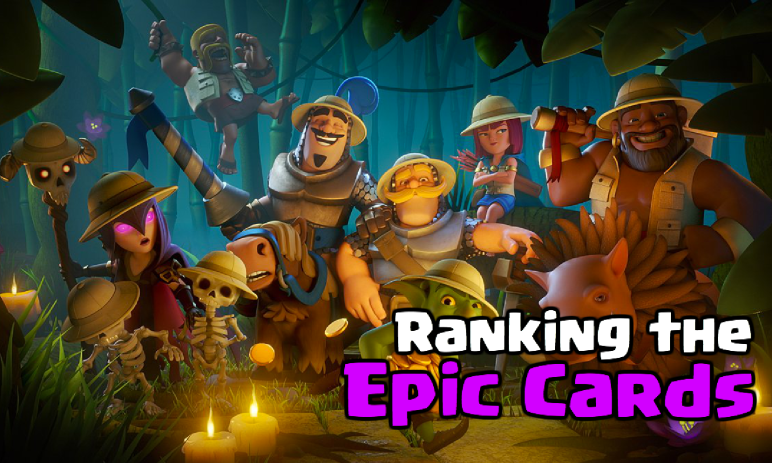 How the Epic Cards are Ranked

When ranking these cards we put a lot of thought and effort into what makes the best epic card the best. We are considering a variety of different ways to rank which are order in importance as follows:

Note: Text color indicates which way the card is trending in regard to the February rankings.

Not just the worst epic card, the clone spell may just be the worst card in all of Clash Royale. The problem with the clone is that it is such a risk to play, often giving you a three elixir disadvantage for a mistake. In a skilled player’s hands, the clone can be a devastating card to your opponent, but more often that not, it gives your opponent a nice boost.

Does anyone even remember the brief surge the cannon cart had a few months ago, putting it up to the #10 spot in the epic rankings? Neither do I. The cannon cart has been miserable since then, providing no value for the 5 elixir that it costs. With so many better alternatives out there, it could be a long time until the cannon cart sniffs the meta again.

Bowler-graveyard used to be SUCH a great meta strategy, but bowler has really fallen off a cliff since the huge graveyard nerf about a year ago. Similarly to the cannon cart, there are just such better options for a support unit or a tank card than the bowler. In order to be viable, the bowler needs a damage buff or a HP buff. Bowler is a great counter to rascals though!

Though the freeze spell is a bit on the rise, there still isn’t heavy use for it across Clash Royale. Mostly, it is just used in niche situations with the hog rider or half dead minions, hoping that your opponent doesn’t have another counter. For four elixir, usually it ends up being a way for your opponent to build up a large counter push.

When the hunter was first released, it was absolute garbage, but since then, the hunter has been a bit on the rise. While the musketeer is a bit of a better option, the hunter is rising up because of the potential power it offers. I think that

With the buff to the radius of the lightning, it has gained a bit of traction back into the Clash Royale meta. However, with the popularity of the fireball and rocket, the lightning is still seen as a somewhat poor card. In order to return to its former grandeur, golem beatdown and LavaLoonion decks must return to dominate the deck meta.

In this case, the guards end up overtaking the skeleton army as a better defensive card. Despite the fall in the rankings, the guards are still a very viable card to use for countering card, especially because of their shield. Thanks to the shield, the guards will take multiple hits from any unit to kill, giving them a huge advantage over the skeleton army.

Somehow, without getting any buffs whatsoever, the rage continues to rise through the epic card rankings. The rage can be absolutely devastating if used with giant or balloon decks, giving a huge increase in both speed and attack speed, which can often result in the tower falling when you least expect it. Personally, I’d like to see the rage toned down a tad.

Once being a joke of a card and appearing at the basement of these rankings, the giant skeleton has now almost cracked the top 50% of epic cards. The giant skeleton can act as a devastating tank card, destroying any chance of a counterpush from your opponent. For one elixir less, this advantage gives it a huge boost over the PEKKA and mega knight.

While the mortar shrunk back in the rankings, the x-bow is on the rise for sure, nearing the top 10 of the epic cards. Right now, one of the best decks in Clash Royale is the x-bow cycle deck and can beat the ever-popular hog decks with apparent ease. Over the next couple months, look for the x-bow to continue to rise, unless it is nerfed in the monthly balance changes.

The tornado is going to be our biggest faller in the epic card rankings, dropping from an outstanding #2 rank all the way down to #11 as it was reworked in the previous balance changes. The tornado simply is not as fluid as it once was, with the duration and overall damage being toned down. The duration actually helped the tornado and it’s no longer as effective.

Even with golem decks seemingly on a brief decline, the baby dragon is still fighting strong, breaking into the top 10 for the first time. Right now, the baby dragon is fitting into so many different kinds of decks, whether it be hog cycle or balloon rage. As a strong 4 elixir air troops, there’s no telling how high the baby dragon could rise.

As I said above with the lightning, the fireball and rocket are taking over Clash Royale, leading to a reduced role for the poison. Still, the poison fits in great with PEKKA and giant decks, allowing you to cover a wide area and tick down weak troops. As long as beatdown decks remain popular, it is hard to see the poison falling very far.

With the popularity of giant decks super high, as well as the rage being a great way to increase damage, the witch is killing it right now. While it might not seem like it, the witch can kill it under a rage spell, actually being able to take the tower on her own under the right circumstances. Put this card in behind your tank unit!

The goblin card is going to stay even in the rankings, though with the release of the rascals as yet another log bait card, it is expected that the goblin barrel should be on the rise very soon. With the goblin barrel no longer being able to be zapped down as it was a year ago, the log is the only reliable way to get a positive elixir trade from the GB.

In these epic card rankings, the PEKKA is actually going to take a step back here. Though still a very viable tank unit, the PEKKA is being outclassed by the giant. Still, the PEKKA can absolutely kill it as a severe damage dealer. One shot by the PEKKA onto your tower can leave you in a world of hurt, especially if the cards in behind the PEKKA connect as well.

Even with the popularity of other splash units like the wizard and baby dragon, the executioner continues its reign at the top. The tornado nerf definitely hurt the executioner, as that was one of the best synergies in Clash Royale, but still the executioner can annihilate practically all units and fits in well with any deck, whether it be golem or hog decks.

The popularity of both of the princes right now is just too much to overcome. The dark prince slides in nicely at the number 3 spot, acting a great splash unit as well as a secondary tank card. The versatility of the dark prince is what really puts it over the top, as it can fit into many different deck archetypes, including siege decks.

Unfortunately, the golem slides off its #1 ranking, but it is still one of the best win conditions in Clash Royale. The golem literally makes its own meta, boosting the mega minion, baby dragon, and night witch as support units. Even with the popularity of the inferno dragon, the golem is still one of the best epic, and overall, cards in Clash Royale.

And our number one card, up 8 from number 9, is going to be the prince. The prince has been on fire lately, which might be strange given his nature. However, the prince is killing it, fitting into so many decks, and actually making a few new ones of his own. The sky is the limit for the prince, but expect a slight nerf somewhat soon.

So that is going to wrap it up for our epic card rankings for May of 2018! Stay tuned soon to see our legendary card rankings. Thanks for reading and comment below what you think of the rankings!