The new hero has finally been released and it is called the Grand Warden! Should be an interesting change this update! Here’s a picture of what the Grand Warden looks like- 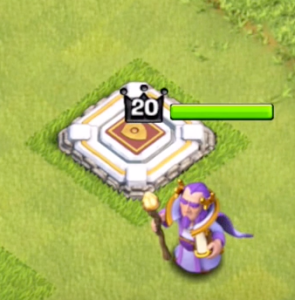 I think he looks amazing with shiny purple robes and a golden staff. Also his altar is amazing, with a white marble to match the Town Hall 11 theme. The warden has both an air and ground mode also. So basically,, he can only defend or help ground troops or air troops at one time. Here’s a glance at the Warden in air mode-

So now what exactly does the Warden do on offense and defense?

The warden will act as a tower. I’m not sure exactly what this means, but my guess is that it either works as enhancing the other buildings OR it acts just like another archer tower. Can’t be too sure yet!

On offense, the Warden works as a supporting troop, increasing the DPS of any troops in its radius. Here’s the Warden going into battle! You can see the radius on the outside of the picture.

Now what is the Grand Warden’s ability? Every hero HAS to have an ability!  The Warden’s is to send out a wave in the radius of his support and every troop in that radius CANNOT take damage for however long the ability lasts! Pretty good if you are able to time it right! Here’s a glance at the Warden using his ability.

It sends a golden ray of light out to cover all the other units! Now lets take a look at some of the Grand Warden’s stats.

So here are some quick tidbits about the Warden-

One thought on “Grand Warden New Hero at Town Hall 11”