Ever since the Town Hall 11 update in Clash of Clans, loot has been terrible across the entire trophy spread. The key reasons for this? 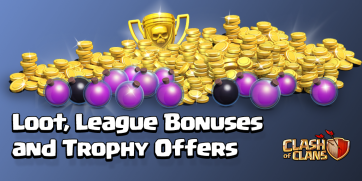 While this picture Supercell released when announcing loot changes looks like an increase, it actually ended killing the entire game. The biggest reason was no more Town Hall snipes, which led players to all make pushing bases. Clash of Clans knew they were losing many mid-high level players, and KNEW they had to offer some solution to this mess.

Star bonuses, the Treasury, and the loot cart! What fun, what excitement, but most of all what hopefulness! Surely Clash of Clans would be able to solve the problem of no loot. Lets run through each of the additions first:

Simple enough, get 5 stars daily and collect a reward, varying depending upon your league. Bronze has low bonuses, while Titan has insane rewards.

Basically, just a new name for what the Clan Castle used to hold. The treasury is stored inside your Town Hall now. Biggest key: only 3% of it can be stolen per raid.

The Loot Cart gives you back 20% of all resources stolen after a raid. There can only be one at a time so make sure to always remove it.

So the final verdict: did this update save Clash of Clans??

My answer is no. It was a pitiful attempt to right the wrong they did. The star bonus gives you just a few hundred thousand, and thats only if you are in a decent league. Of course, it gets harder to get stars the higher league you are in. The treasury was almost pointless, although the Clan Castle does look MUCH better without those storages on it. Lastly, the loot cart was the only decent change. It’s kind of a hack though, not a true way to gain loot, only to gain back a bit that you lost.

The Future of Loot

How will farming change in these upcoming crucial few months? My guess is that Clash of Clans does something drastic in order to change this. Personally, I’m hoping for reinstating the snipable Town Hall, but once it’s changed, it probably won’t go back. The point is, this update didn’t help much and a lot of Clash of Clans players will be turning to Clash Royale if something doesn’t change soon.

Thanks for reading! Tell me your comments about the loot situation in the comment section below!

5 thoughts on “Did the Treasury Update Fix Clash of Clans?”