Tournaments will be coming to Clash Royale, most likely in the next update, should that be in June or July. Tournaments in Clash Royale would be a great addition to the game but it is unclear what form these tournaments would take. Here’s the tweet Clash Royale sent out:

Just a little something we're working on… pic.twitter.com/FuJFiTpDud

So basically it appears as if tournaments will be replacing TV Royale, which is probably a good thing. Maybe instead of TV Royale, we will see some sweet replays from tournaments. So far tournaments are all speculation; I should have an article out soon about some of the details included in tournaments! 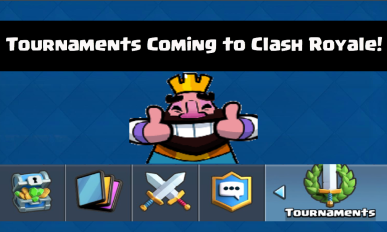 Anyways, regardless what this is, tournaments will be a sweet addition to the already great game of Clash Royale. Stay tuned to see tournaments in July or just in the next update!

One thought on “Tournament Mode in New Clash Royale Update!”