-Ice Wizard: I think that the ice wizard will be moved up to being unlocked in Frozen Peak, since it goes with the theme. This means that there will be a new legendary unlocked in spell valley.

-More Freeze: I think that a smaller freeze spell will be unlocked here as well. Maybe a freeze spell with the duration of 2 seconds or so, in between the zap and freeze costing 3 elixir.

-Freeze Spell: It only makes sense for the freeze spell to be moved up to Frozen Peak too! It is currently unlocked in P.E.K.K.A.s Playhouse so we would have to see a huge increase.

-Yeti: The yeti would be similar to a giant, but it would move faster, be weaker, and having slowing abilities with a radius of 1 tile whenever anything got close to it! 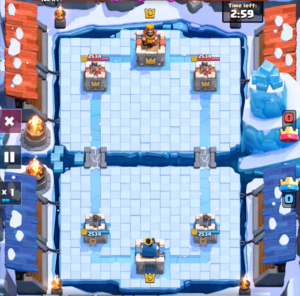 This is an image of Frozen Peak. Personally, I think it is one of the more well done arena, really filling its role in the game. I love the ice tower on the right side and the snow throughout the arena.

Thanks for checking in on the first sneak peek in this July 2016 update for Clash Royale! Make sure to check back soon to see more update news from Clash Royale! Follow the update on YouTube as well: https://www.youtube.com/channel/UCNo3IxCrp34erbCRLmG8HIA

One thought on “NEW ARENA! Frozen Peak in July 2016 Update!”