What are the top 10 cards in Clash Royale as of August 2016? The following are in my opinion, the 10 best cards in Clash Royale at the moment. I did this article 3 months ago, and there is only 1 returning card to the list! You can read that article by click here. It is crazy how much cards can change in only 3 months! 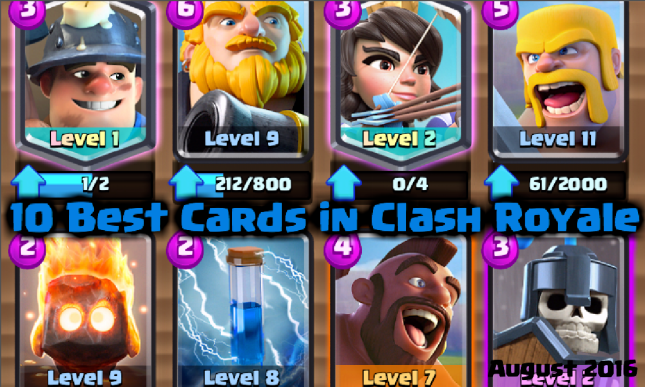 Miner- The miner actually made my 10 WORST cards last time around. However, since then, people have figured out how to use the miner to be effective, which usually involves using him as an offensive tank. The miner is extremely effective and decks based around this legendary have risen to the top.

Princess- The princess is by far one of the best legendary just because of her insane range. The princess is extremely powerful because she does splash damage, so you almost need to take damage to your tower before you can take her out! For 3 elixir, the princess is a great card and you are lucky if you can pull her out of a chest!

Ice Wizard- The last of the 3 legendaries that make this list, but the ice wizard certainly isn’t the worst. Once considered, just a decent legendary card, the ice wizard is one of the best, if not the best, support units in Clash Royale. His high HP and splash damage, combined with his slowing effect make him extremely good in almost any deck.

Royal Giant- Of course, the royal giant HAS to make this list. The royal giant is one of the most frustrating, yet common cards in Clash Royale. It is nearly impossible to stop if played correctly, which it is nearly impossible not to play correctly. Its range makes it tough to play defenses against it and it has high health and does a lot of DPS.

Fire Spirits- Fire spirits have really become a part of almost any deck simply because they provide so much value for 2 elixir. With fire spirits, you can take out minion horde, goblins, skeleton army, and any other small, spam troop. You don’t get to keep the spirits, but it does clear the way for your troops to move out.

Zap- Despite the recent nerf, the zap remains very strong. The best part about the zap is that it only costs you 2 elixir and it gives you a nice freeze on any troops or towers that it hits. It also deals damage, meaning that you are able to take out goblins and skeletons with the zap alone. The zap gives you a ton of options which is why it is on our top 10 list.

Furnace- The furnace, like the miner and fire spirits, also made the worst cards in Clash Royale list in May. However, as fire spirits has gotten stronger, the furnace has increase in strength as well. Not only does it spawn fire spirits (spawning 3 times equals your cost), but it also provides a valuable defense against hog or miner decks.

Hog Rider- The hog rider has always been a solid card, despite repetitive nerfs to it. It has a fast speed and does great damage once it gets to the tower. The hog also only costs 4 elixir which means that you can back it up with a lot of other units. The hog isn’t strong enough to hold up when defended against, but it is great if you can get it to the tower!

Guards- Guards have become a lot stronger ever since the last balance change where they don’t get blown back with their shields anymore. There are essentially weaker barbarians, great for taking out 4 or 5 elixir units to gain your elixir advantage. Also, guards can be great for pushing to defend your hog/giant.

So those are the top 10 cards in Clash Royale as of August 2016! Check back in a in a few months to see how the cards might have been shaken up! See you guys tomorrow with a brand new article!