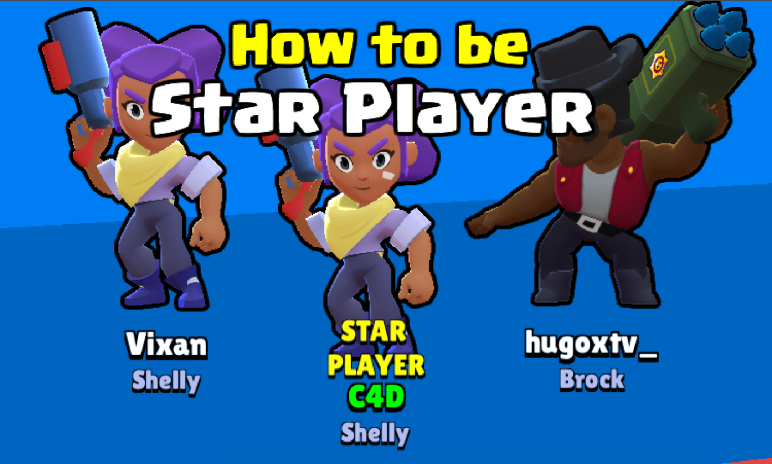 Star Player in Smash and Grab

First off, smash and grab is the main Brawl Stars event. This is the event where you go and collect gems and try to help get your team to hold on to 10 gems.

So in Smash and Grab, there are three main things that go into determining the star player! First off, you want collect as many gems as possible. Make sure that you don’t go hard for them all though; it needs to be a team effort since 95% of the time the star player is on the winning team. Next, you want to have a lot of kills. Having kills boosts your stats, which makes you more likely to become the star player. Lastly, try to avoid dying at all costs. You simply can’t be the star player when you are waiting to respawn and not in the middle of the action!

Next, we have the bounty event. This is the event where you collect stars by killing players. If a player has a lot of kills without dying, they will be worth more stars to kill.

Just like in Smash and Grab, you want to avoid dying as much as possible. Every death hurts your chance at being the star player for that event. In the bounty map, kills are going to matter a lot more though since that is how you win stars. Try to get as many kills as you can, since that allows you to collect stars to win. Of course, you also want to hold as many stars as possible; the max I have ever seen in 7. Usually if you get up to a bounty worth 5 stars, you will win star player!

Lastly, we have the heist event in Brawl Stars. This event is where your team will either be defending or attacking the safe, depending on what side you get paired up on.

The last event that you can win star player for in Brawl Stars is the heist event. Heist is the most difficult to get star player on consistently since you basically have to be on the winning team to be the star player. Unfortunately, heist is broken right now since the offensive team wins almost every time so to be star player, you want to be on the team breaking open the safe! Other factors that come into play is how much damage you do on the safe and how many kills you get, as well as how many death you end up having.

4 thoughts on “How to be Star Player in Brawl Stars”