While most of the focus has been on the zappies and hunter from the December 2017 update to Clash Royale, the next legendary card has been leaked in game, which is the Royal Ghost. The Royal Ghost looks ridiculously OP, like most new legendary cards, being able to turn INVISIBLE when not being shot or being near the tower. Here’s a full overview on the Royal Ghost! 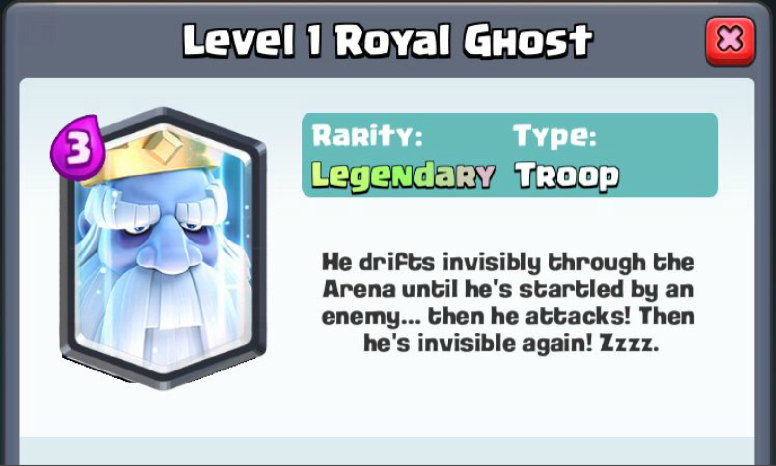 With the December update dropping today, the Royal Ghost was revealed in the coming soon section of the cards. He will be released in 23 days, or Friday, January 5th.

Like the last two legendary cards released, the night witch and mega knight, the Royal Ghost looks almost certainly OP. Costing only 3 elixir, he can go invisible until he is attacked by an enemy. It is unclear exactly what this entails… is the RG going to be invisible when first played? Does the RG become visible if he is hit with a spell? If he’s attacking the tower, is he still invisible?

Based on the card description, it appears that the Royal Ghost will be invisible all the time unless he is being attacked. I just sure hope that he is visible when he is first played. Here’s the card stats at level one for the newest legendary card in Clash Royale!

Based on these stats, we can make some comparisons based on other cards that are already in the game. With a speed of Fast though, the Royal Ghost is going to be a pain to deal with.

So based on these statistics, combined with the fact that the Royal Ghost can go invisible and that he only costs 3 elixir is almost a sure sign that he will end up being OP until he gets nerfed. We will see come the 5th….

That’s all we know about the Royal Ghost right now, as gameplay is not currently released or leaked yet. As January 5th grows nearer, we should know more about this newest card. Thanks for reading and comment your impressions on the Royal Ghost!