Welcome Clashers! Today I will be telling you 10 of the best base design tips I have learned throughout 2015. All of these will help you succeed greatly on defense since the latest updates. Enjoy and tailor your base based (pun intended) on these tips! 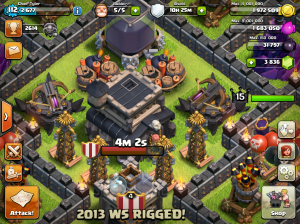 A centralized Town Hall is key to winning defenses. If it’s outside your base, then you become a snipe which translates into an easy 1 star. It should be located in the middle of your village, surrounded by defenses, traps, and your hero(es)!

Having your King for TH7 and TH8s, or your King and Queen for TH9 and TH10, is actually extremely important to defending. They are essentially extra Clan Castle troops, except tanks! The Queen is especially important to stopping giant or hog raids.

In my opinion, there is only one way that your infernos and x-bows should be set. Town Hall 8s and below don’t need to worry, but for TH9s and TH10s this is very important. I think that x-bows should always be set on ground and air and infernos on multi-target. This way you can stop any attack strategy.

Of all of these tips, this may the most important. If you have troops in your CC, it makes it TONS harder to beat your base. Most people, when pushing in crystal and master, won’t check to see if there are Clan Castle troops, which means they are free to destroy the tanking units!

Builders Hut in the Corner

This is kind of a trick to prevent a three stars. Lots of times, the attacker will actually be pressed on time but still have plenty of troops remaining. Having a builders hut, laboratory, or barrack in the corner might make them run out of time and possibly prevent the three star.

Double giant bombs are one of the best raid ending things out there. This is especially true when getting raided with hogs. Also though, if a GoWiPe or GoWiWi raid gets in deep, the double giant bombs will be able to take out quite a few of those units.

Plenty of Space for Traps

Having a lot of empty gaps in your bases throws off an attacker. They won’t be sure exactly where the bombs and skeleton traps are located, so it will alter their entire placement and deployment of spells and troops. Anything to throw off your attacker!

Hidden Teslas on the Outside

This tip is more for farming than trophy pushing. You want your storages to be spread out through your base instead of all together. This way, if the attacker breaks through, he won’t be able to get all of your loot because its in different places.

Your air bombs need to be around your air defenses for one reason: lava hounds. The hounds will fly straight towards your air defense and you need to kill them as fast as possible so you can start targeting the loons. The air bombs will take care of that for you!