The newest Clash of Clans update has been announced and is set for the same date as the Friendly Challenges update. This update is basically a huge balance change update with the valkyrie becoming less of a threat and air troops on the rise. Lets go over the 3 major updates followed by the minor changes!

And finally, we see level 14 defenses in Clash of Clans. Of course these will be available at Town Hall 11 and serve mainly as a nerf to valkyries. This new cannon level should be able to shut down the valks at a must faster rate. I feel like Clash of Clans has run out of ideas, however, and now must keep adding levels in order to keep having updates to please the fans. Anyways, here’s a glance at the new level 14 cannon.

Another extra level for the lava hound! This will turn this tanky unit even tankier. The goal here is for the ground valk attack strategy to turn to a more even distribution of air troops. Check out the new hound.

Lastly, of the “major” updates in this update is the level 7 balloon. We already know that the level 6 balloon at Town Hall 9 is an amazing strategy, so I can’t wait to see some Town Hall 11s using the new loon with the new lava hound. Expect a level 9 air defense soon. Check out the sexy new level 7 balloon! 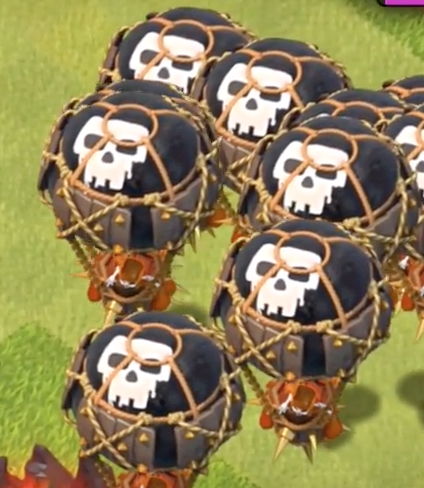 Some major things in these other updates are the new spring trap levels. It’s assumed that upgrading your spring traps will allow you to flip valkyries for sure, but I’m not sure if they will be powerful enough to flip bowlers or P.E.K.K.A.s. Also the “smart” builder idea sounds interesting, we will have to see what it is actually like before coming to a conclusion.

This marks the end of the update so far. Based on hints from YouTubers, I think that we might be seeing some more sneak peeks to this update. Check back in here tomorrow!

One thought on “Clash of Clans May 2016 Update Announced!”