The second new elixir troop in the May 2016 update will be the miner as we all knew because of the leak! This troop is straight out of Clash Royale, just like the new baby dragon. Looks like Clash of Clans is looking to release the update tomorrow based on today’s two sneak peeks.

The Miner is going to be exactly like it is in Clash Royale, a troop that can bury underground to get to buildings! It will be unlocked at Town Hall 10 and it will take up 5 housing space. Be warned, a swarm of miners is not the right strategy to use!

Miner is Going to be OP

The miner can be seen as both an overpowered troop and underpowered! It tunnels everywhere, meaning that it doesn’t just pop up once in Clash Royale. After it destroys one building, it will tunnel straight to the next one! That means after all buildings are cleared it will be able to head straight for the core, not even stopping to get through any walls!

Miner is NOT Going to be OP

Like it being viewed as OP, it can also be seen from the opposite side. You have to deploy the miner like every other troop, outside the red lines! So the miner can bury straight to the Town Hall!

The miner is also able to be targeted by the Eagle Artillery while it is underground. That way, at least one defense is able to hit the miner before he surfaces. 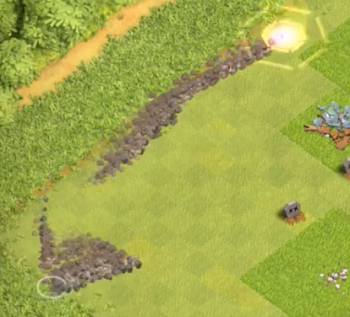 So that is basically all there is so far about the miner. If used correctly this can be an extremely effective troop, but if used badly it’d be a complete waste of housing space! Check back in here tomorrow to see hopefully another sneak peek or possibly the update!