The log and the lumberjack will be the 2 newest legendaries in Clash Royale! The newest sneak peek announced these two legendary cards that will be coming in the July 2016 update. 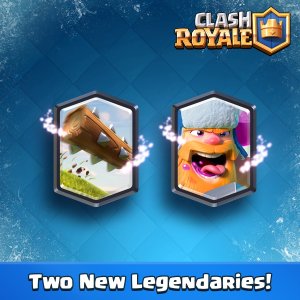 Now I am extremely disappointed in these two legendary cards. Up until now, legendary cards are supposed to be awesome and really improve your game! With these two cards, they just aren’t great. I probably wouldn’t use either of them if I receive them in a chest, which would be a HUGE disappointment.

The log costs 2 elixir and it works the same as one of the bowler’s boulders. However, there is only one of these logs and it does about the same damage as the boulder. This new legendary card will be able to stretch across the entire side, hitting every troop. However, it has the strength of arrows or so. Very disappointing for a legendary card.

You guys might think that I’m being too harsh without actually trying out the cards until after the sneak peek when the update drops in July, but really these cards aren’t cut out to be LEGENDARY cards. These two new legendaries are anything but legendary. I would be ok with them if they were common, rare, or epic, but I will be sorrily disappointed if I get a legendary and it is one of these two. Who knows, maybe  the update will fix them, but as of now, it seems as if Clash Royale is already losing its magic.