Some leaked images lately have shown that there will be a new chest and new card in the Clash Royale December 2016 update! These leaks may or may not be true but only time will tell as more Clash Royale sneak peeks come out.

A new chest has been leaked for the December 2016 Clash Royale update. The chest looks like a combination of the gold and crown chests, which you can view below.

This leads me to believe that due to the recent lack of gold, this chest might be a pure gold chest, meaning it gives out no cards, only gold. That is pure speculation and we will have to wait until the sneak peek to determine what this chest might be.

In Orange Juice’s balance change video today, he showed us lava pups, except that the lava pups were a card, not part of the lava hound. 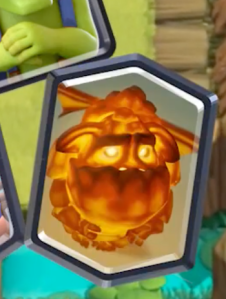 This means that we might be seeing a new lava pups card, a card that I have always thought would be sweet to see in Clash Royale.

That concludes the leaks that we here at Clash for Dummies have found. These aren’t guaranteed and we will have to wait until the next December update sneak peeks to be certain what new chests and cards might be added. Check back soon for more update news!