Now, let’s discuss the units that you will be using as defense and support mostly (skeletons, archers, and baby dragon). First off, the skeletons should almost never be used as offense, but instead should be used as a cheap counter card where you can make a good positive elixir trade. If skeletons aren’t enough, you should use archers. Archers are great on defense since they can kill air units, but can also be used to support the P.E.K.K.A.. Lastly, we have the baby dragon which is more of a support unit than a defensive unit. Play the baby dragon to help clear the P.E.K.K.A. of any swarm units that are cast against it.

Last, but certainly not least, let’s discuss the spells included in this deck. We have the every-occuring log which is a great card to have in any deck, but even more important for P.E.K.K.A. decks. The log can clear popular counters like the skeleton army and goblin gang. The poison is a spell often played with graveyard, as it can destroy archers, minions, and goblins quickly, making it a lot harder to counter your graveyard. And finally, not a spell, we have the tombstone. The tombstone is going to act as your defense here, giving you a steady stream of skeletons to help counter offensive seeking units!

As I said before, having the P.E.K.K.A. and graveyard together is what is going to seal the win for you when using this deck. The P.E.K.K.A. will act as the main tank, taking damage from the arena tower and whatever support troops your opponent comes out with. Meanwhile, the graveyard will be able to do most of the real damage, especially once skeletons start accumulating on the tower. 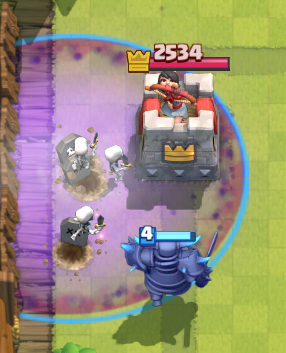 However, you shouldn’t try to rush this combination. It is a very expensive 12 elixir to put into play and allows your opponent to build up troops for a big counter push. Therefore, you only want to combine these two win conditions if you know you have a big elixir lead and can defend whatever counter push comes your way once your graveyard skeletons fade away.

Any damage to the tower is good! Therefore, you should be trying to hit the arena tower with any spell you place, even if it is as minuscule as a 100 damage from a log. If you get the opportunity, have the spell you play damage the tower! For example, if there is a princess on the bridge, send your log close enough so that it can reach the tower. 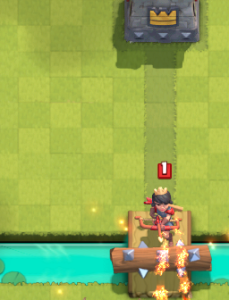 You also have the poison, which is even more important to get chip damage, since it can do more damage over time. If there is a group of minions flying by the tower, don’t be afraid to use the poison to wipe out those minions as well as chip the tower down on health even more.

The best way to be able to afford both the graveyard and the P.E.K.K.A. during one push is to turn defense into offense. That means counter pushing hard using the P.E.K.K.A.. Ever since the deploy time was reduced, the P.E.K.K.A. has been a viable option on defense, able to defend against big units like the golem and royal giant.

Once you place the P.E.K.K.A., start saving elixir to that you can turn your 7 elixir defense into a big counter push. By the time the P.E.K.K.A. gets through whatever tanky unit its working on, you’ll have more than enough elixir to afford the graveyard and more!

LavaLoonion: This is a pretty tough combo to beat with this deck, but you’ve got to rely on your two air shooting units. Play the baby dragon right on the balloon and let your archers start chipping down the lava hound.

Golem Beatdown: The P.E.K.K.A. becomes the ultimate defensive weapon with against this deck. First off, you want to pull the golem with the tombstone while the baby dragons cancel each other out.

Hog Executioner: Like LavaLoonion, this combination is also pretty tough to beat with a lot of cheap units. Play the tombstone to pull the hog rider while your baby dragon distracts and takes care of the executioner.

Battle Ram: Finally, one of the fastest growing card in popularity needs a section to counter it by itself. Luckily, your skeletons and archers are more than enough to take down the battle ram without any damage to your tower. 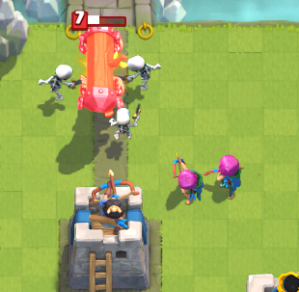