The Archetype Deck Challenge is going to consist of two stages, practice and the actual challenge. In practice, you’ll have to play until you get 12 crowns, which should give you an idea of what each deck is. After you get 12 crowns, you’ll unlock the challenge, which you can get up to 6 wins in. 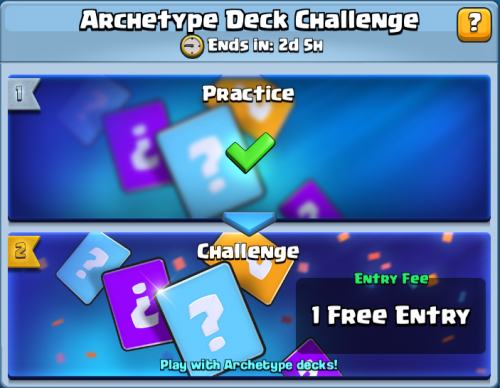 For the Archetype Deck Challenge practice, you get 4 different rewards, all at 3 win intervals. Here are all the gold rewards from the practice  round.

Once you enter the real challenge, rewards increase a bit more. The max amount of wins is 6, from which you can earn a gold reward as well as a challenge chest, giving you 700 gold and 70 cards. Every two wins you get a milestone reward, which are listed below.

These rewards are definitely worth it, so you should be going for this challenge and attempt to get 6 wins. Let’s go over all the deck archetypes that you might be offered during the Archetype Deck Challenge!

Use Elixir wisely! One way to play this deck: wait until x2 Elixir, drop the Giant, support it with Spear Goblins/Goblin Gang, and then send both Princes on the opposite lane.

It’s all about having an Elixir advantage and supporting the Golem. Defend until x2 Elixir kicks in, then slowly build your attack by dropping the Golem close to your King Tower, then add supporting troops behind him. Strategically place the Elixir Collector!

One way to play this: P.E.K.K.A for defense; Miner, Battle Ram, Poison for offense. This deck is pretty versatile, just make sure to keep an eye on your Elixir count after dropping P.E.K.K.A (that’s when your opponent will strike!)

Dominate the sky by ‘tanking’ with Lava Hound, using Balloon as your win condition, and supporting the attack with Minions. Defend with Tombstone, Guards and Mega Minion!

Cycle through your cards to keep the pressure up on your opponent. If your opponent has a strong attack coming your way, pull their troops to the middle (on your side), cycle through cards to defend, then throw a Goblin Barrel to force them to defend!

Use Hog Rider as the win condition – support him by dropping Ice Golem or Ice Spirit in front (before deploying Hog Rider). Rinse and repeat.

You MUST use Elixir wisely. Drop the Elixir Collector strategically (don’t place it near the tower your opponent is going for). The Three Musketeers are great for both offense and defense. Main win condition is Battle Ram and Miner.

Most of the cards in this deck do splash damage, meaning they can damage many things at once. Use Bowler as a ‘tank’ and stack Poison + Graveyard on the enemy tower.

Bridge Spam = drop many cards at the bridge. Make sure to keep an eye on your Elixir count. Dropping a ton of troops at the bridge leaves you vulnerable to counter attacks on the opposite lane.

Good luck in the Archetype Deck Challenge and have some fun trying out some different decks that you usually play. This challenge can open your eyes to a whole new type of deck in Clash Royale. Thanks for reading and comment below which deck archetype you think is the best to win with!