Where is this February update, the first of 2015? When will Clash of Clans be releasing this?

If you’ve been reading my last couple posts, you’ve seen how at the end of each post, I add a comment about a new update coming soon. The last update was released an incredible

Now, obviously this is a very, very long time between updates. So now we ask ourselves- when is this update going to be and why is it taking Supercell so long to release it? I believe there can be many of reasons for this starting with……

If it is taking this long, usually something huge is coming.  The update for Clan Wars (the biggest update in Clash of Clans history) was released 3 months after their previous update. Clash of Clans might need the time to develop such another big add-on. Some of the biggest beliefs: Town Hall 11 (not in this update folks, sorry), new Single-Player maps, and Daily Quests.

However, I don’t think this is the case. Everytime, Supercell released a monster update (Clan Wars, Town Hall 10 etc.) they call the famous YouTubers such as Chief Pat, Galadon, and Daddy to come out to Helsinki, Finland (Supercell’s HQ), to have them try out the new update and see how it works. It’s very obvious when this happens, all the YouTubers posts in over social media, so Supercell isn’t releasing a massive update this time. Which leads us to my next guess…

Out of Update Ideas

Yes, yes this can be true. Supercell has already taken the game so much further than the original game with 2 new Town Hall levels, a new resource, and constantly adding new upgrades to buildings, that they might not be able to add anything else.

However, if you really think hard, there is A LOT of features Supercell could add. If you have Boom Beach, there are Operations, basically huge maps where your whole task force has to attack it together. This could be turned into something similar in Clash. Also, think about the water. That is untapped potential for Supercell to use. Yes, it might be getting too close to Boom Beach, but still, there is so much the developers could add. Which leads us to the last point….

Strange title right? How would their Supercell commercial, delay an update? I actually had no thoughts that this could be the reason, but allclash.com clued me in. The SuperBowl ad was a huge hit and attracted thousands of new players from across the US. They all wanted to find and attack AngryNeeson52! But seriously, this advertisement attracted lots of more viewers who were hooked on the game. 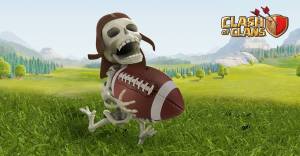 Eventually, after a month or so, these new users would start to become bored of the game. What better way to hook them back in, then to release a new update? Unfortunately, it’s only been 2 1/2 weeks since the commercial, not a month. This could be the reason, could not be.

Anyway, the point of this post is to show that we actually have no idea when this update might be coming out. I was 90% sure we would be seeing the first sneak-peek Monday or Tuesday. Quickly, I was proved wrong. I want to think that it will finally be out sometime next week, but don’t be surprised if you don’t see it until mid-March.

3 thoughts on “Where is the February Update?”