Ever since the last balance changes killed the three musketeers, there hasn’t really been a dominant card that owns the Clash Royale meta. Instead a number of win conditions have jumped to the front including PEKKA, ram rider, royal giant, golem, and royal hogs. Based on the most dominant decks right now, these 20 win challenge decks should get you as far as possible in the challenge!

Ever since its release, the ram rider has been rising up through the meta, now being one of the best win conditions in Clash Royale. Combined with the bandit and PEKKA, and you have a nearly unstoppable combination. The deck also features two great support cards with the e-wiz and baby dragon, while also having 3 spells. Ideally, you want to use the PEKKA in the last minute of the battle in a beatdown push, while cycling ram rider and bandit at the beginning of the battle. 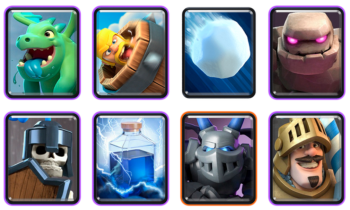 It is almost guaranteed you’ll be seeing a lot of barbarian barrels and giant snowballs towards the later stages of the challenge, so you might as well join the trend and play these cards. Mainly, this deck is going to revolve around the golem, with the prince as a secondary win condition. I’d wait to play the golem until you hit double elixir, using your support cards to defend. Try to hit a couple lightnings onto the tower if you can take out a troop or two along with it. 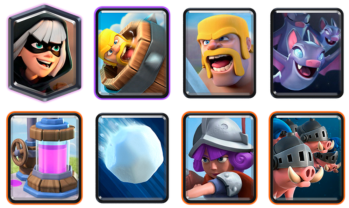 After being one of the most dominant cards in Clash Royale a few months ago, the royal hogs are back to their winning ways in Clash Royale. With barbarians being a much more powerful card than before, you have a strong defensive card. You can also easily run split lane pushes between the barbarians and royal hogs. I’d attempt to start building up elixir towards the beginning of the battle by playing some pumps and push with your royal hogs whenever you see an opportunity.

Right now, royal giant has never been better and this is one of the best royal giant decks in Clash Royale. You can use the furnace for a defensive building while also dealing some chip damage onto the tower. The key here is cycling the royal giant as fast as possible, hoping to play him at least 5 times throughout your battle. Whenever you push, be sure to support the RG with the mega minion, baby dragon, or electro-wizard in order to maximize potential damage.

Even with these great decks, it is still going to be tough to get to 20 wins. I would wait a day to start the challenge, so all the pros are able to run through, and then start going for the 20 wins. Thanks for reading and good luck reaching the 20 win milestone in this year’s CRL challenge!