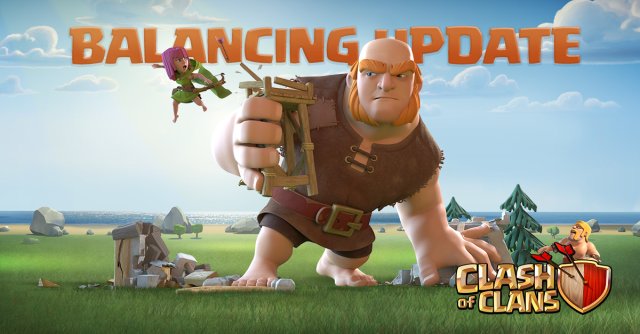 We’re also introducing a round of balancing to a few units in this update!

The vortex duration of each Tornado Trap level has been reduced.

Everyone’s favorite ballistic bag of bones is getting a slight HP increase from levels 5-8, but also the damage for Bomb traps will be increased at levels 7 and 8.

What does it mean? More boom for your buck. ‘Nuff said.

We’ve got a couple balance changes for the Builder Base that’ll be going into this update as well.

The Battle Machine’s regeneration time has been reduced to match the training time of your Training Camps.

A Dark Quality of Life Improvement

As a final touch on today’s announcement, we’re adding a dark mode to the multiplayer matchmaking screen – in other words: a new option to darken the clouds screen.
This new “dark clouds” mode will reduce the brightness of the clouds, making them a bit easier on the eyes; especially if you’re playing in a dark room or if you’re feeling especially photosensitive to bright, white lights.

That’s all for these balance changes in Clash of Clans. The team did hint that we would be seeing one more piece of news that would be revealed in a few days, so stay tuned! Thanks for reading and comment below your impressions of the April balancing update!

One thought on “Clash of Clans April 2019 Balancing Update”