Where Does the Ship Take You?

Well, first off, we have no CLUE what the ship actually does. Until the update sneak peeks actually begin, we won’t know much about the boat, other than it is just chilling in our village.

However, there have been a few leaks/rumors/speculation on what the ship will be. When I first learned about the ship, almost 6 months ago, I thought that the ship would take you to a clan village, or maybe some daily quest vessel.

A few days ago, a leak surfaced from the Chinese Clash of Clans page which showed this image. Could the ship take us to a new village where it is night instead of always day? We simply won’t know anything for certain until Clash of Clans begins releasing sneak peeks. Speaking of which, when are the sneak peeks going to begin?

When is the May Update Dropping?

So this update is definitely coming in May; we won’t have to wait until June! Here’s what a Supercell moderator said about the upcoming date in respect to the update. 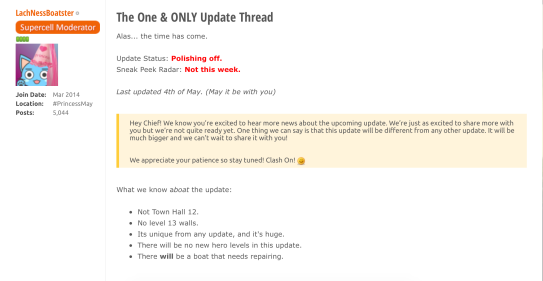 So the update isn’t dropping this week, which means sneak peeks almost definitely will start next week. Because of timing and how many sneak peeks there should be, the May update for Clash of Clans should be dropping on Monday, May 15th or Tuesday, May 16th. Let’s keep our fingers crossed that this update is what the developer team and YouTubers have been hyping it up to be and not a disappointment like the TH11 update!

3 thoughts on “Clash of Clans Boat RELEASED for May Update!”