The battle ram is the newest troop in Clash of Clans, added for the 5th anniversary (Clashiversary)! This new battle ram troop is just like in Clash Royale, except that it spawns 4 barbarians after the ram hits. Today, we are going to teach you some battle ram strategy and some tips to use the battle ram more effectively.

Before we get into a lot of battle ram strategy, let’s go over exactly what the battle ram is as a troop and how it can be used at both low and high levels. The battle ram takes the place of goblins as the 4th troop unlocked in Clash of Clans, meaning everyone from Town Hall 2 and up has access to the battle ram.

In case, you were wondering, here are the full statistics of the battle ram. It does adjust based on your Town Hall level and the ones below are the statistics of a Town Hall 10. 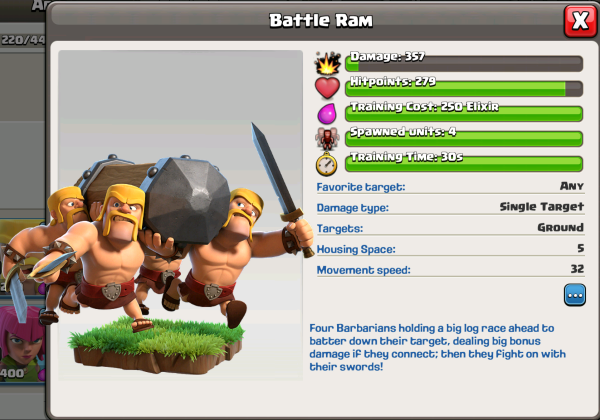 The battle ram does seem very powerful with its insane connection damage, plus 4 barbarians that spawn once the ram disappears. Think about it; with a space of 5, it only costs you one housing space for a huge amount of initial damage. However, the barbarians that it spawns are MUCH weaker than a barbarians you would train in your barracks. Here’s the stats for the Town Hall 10 barbarian.

When you drop off the battle rams, they head straight for the collectors; they don’t target defenses first. The ram deals a ton of damage to the pumps or collectors, knocking off almost half of its health. Once the rams do connect though, they will disappear and you will be left with the weak barbarians.

Despite how weak these barbarians are, they are able to finish off the collectors for the most part. Bringing a full camp of battle rams will allow you to be able to take out every outside collector/mine in a base. That being said, I would suggest using another troop to tank for the battle ram barbarians, namely giants. The giants tanking the defenses means that the weak barbarians will be unmatched when they lose their ram, allowing them to clear buildings a lot easier.

You have a week to complete this event for pretty decent rewards! You only need to use 5 battle rams, but if you get 10 wins with them, you will receive 500 XP and 250 gems. Completely worth it for just squeezing in 5 battle rams (worth 25 troop space) into your army composition.

That is going to wrap it up for our battle ram strategy guide, along with our quick coverage of the battle ram event that is currently going on with in Clash of Clans. Personally, I really enjoy the battle ram, even if it is a bit weak after it connects. Still, let me know what you guys think about the battle ram in the comments down below! Thanks for reading and come back soon for more Clash of Clans content!