Clash of Clans is celebrating their 5th anniversary (crazy right?!) and to celebrate they are offering an August update that features many limited time features like the Battle Ram, Shrink Trap, and Anniversary Cake to appear in game. There is a whole bunch of fun content coming in this update and I’m here to share it all with you.

Note: All images are originally found on allclash.com

Just like how Clash of Clans released the ice wizard back in winter, the battle ram will be another limited time troop, that will stay for a certain period of time before disappearing into the void forever. If you guys play Clash Royale, you will know all about the battle ram. It charges at defenses and when it connects with the defense, it spawns two barbarians. Here’s a glance at the battle ram stats for Clash of Clans!

So, based off of this stat sheet, it looks like the battle ram will be somewhat similar to the giant with a few noticeable differences. First off, they are similar in the fact that they both take up 5 housing space, however, the giant is quicker to train, much more expensive, and moves much slower. The battle ram will be almost exactly like it is in Clash Royale: fast, highly damaging, and deadly if you don’t counter. One big difference from Clash Royale is that the Clash of Clans battle ram will spawn 4 barbarians instead of 2.

Again, we are seeing so many similarities to the Merry Clashmas event in which Clash of Clans added not only a temporary new troop in the ice wizard, but also a limited time trap, the freeze trap. The freeze trap was so much fun, so I’m expecting that this shrink trap will likewise be a ton of fun to defend with. So what is the shrink trap? Well, it is exactly as it sounds: it shrinks the health and damage of any units that come across it. Here are the full stats for the shrink trap!

Awesome and maybe even a little bit OP right? However, the troops are only tiny for a limited time; its unclear how long this “time” will last. It is a 2v2 sized trap, making it the same size as a giant bomb or a tesla. 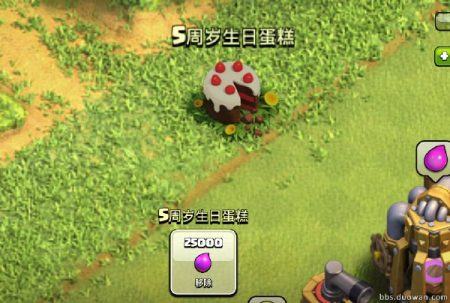 It is in Chinese, but you can guess that it probably says 5 year anniversary or something along those lines. It costs 25k elixir to remove but it will give you 75k elixir back. Don’t remove these though; they will make your village look sweet years down the road!

Now 1.8 trillion hours is quite amazing, but you might notice that the builder huts are upgrading in the picture… what does this mean? This image has been leaked concerning the August 2017 update and it appears from the picture that you can now sell your builders.

Of course, this doesn’t really make a lot of sense, based off the image that Clash of Clans tweeted out of the builder huts being upgraded. Then, this image was released of a whole bunch of different builder huts, along with some other images from this Clash of Clans anniversary update.

There are 6 different builder huts in this picture, which is just incomprehensible. Most likely, you will be able to have a temporary upgrade to your builder hut, in which you can choose to upgrade to one of the 6 options. Each one of the 6 different huts will probably have their own separate perks which you can utilize while the anniversary update is live. Another option is that the builder huts will become like mini-Clan Castles. By upgrading it, you can decide what troops that you want to defend your base. But, this is still all so unclear and we don’t really know what is going on with the builder huts.

Last, but certainly not least, are the events that Clash of Clans will be releasing during the August 2017 update! These events all relate to the new buildings and troops that will be in this update. There are 5 different events that have been unearthed so far in the August update so let’s walk through each one!

First off, we have a pretty typical troop event, except that this one deals with winning using the battle ram. Only one battle ram to gain the rewards which seems weird, but can’t complain about using a new troop!

Next up isn’t really an event, but a 1 gem boost is always pretty awesome! You will be able to boost all your gold mines, elixir collectors, and dark elixir drills for only one gem each!

Relating to the whole builder hut controversy, it appears that they could actually work sort of like a clan castle, only holding just giants inside! This event is really unclear right now.

This new event relates to the spell factory, in which you can brew a brand new spell which seems to be like the Santa’s Surprise spell from a few years ago. I can’t wait to try out the Birthday Boom spell!

Finally, we have the event that features the shrink trap! It looks as if you can only build shrink traps for just a few days, but regardless it will be an awesome couple days with a new trap!

And that is everything that will be coming in the August 2017 update to Clash of Clans! Keep in mind that all of these updates are for a limited time, but like the ice wizard, having new troops for a short time will be a lot of fun to mess around with. Thanks for reading and I hope you guys are as hype for this Anniversary update as much as I am!