You can view the old ranking here: https://clashfordummies.com/2018/08/19/clash-royale-common-card-rankings-august-2018/ 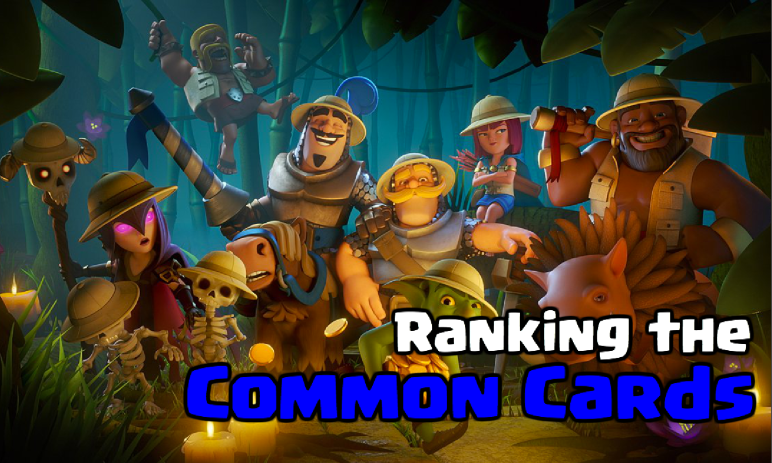 How the Common Cards are Ranked

When ranking these cards we put a lot of thought and effort into what makes the best common card the best. We are considering a variety of different ways to rank which are order in importance as follows:

Note: Text color indicates which way the card is trending in regard to the August rankings.

There’s no doubt about it that the bomber is one of the worst support units in Clash Royale by far. In a game where new air troops are added every couple of months, there is no way the bomber can rise to the top of the meta not being able to kill air troops. There are too many solid alternatives to the bomber in order for him to be successful!

I’m pretty happy to see the elite barbarians this low, since it is great to see a low skill card not at the top of the meta game. Still, I think that Clash Royale almost has to do something in order to buff the elite barbarians, since this card is now one of the worst common cards in Clash Royale. Maybe a reduction in cost to 5 with a speed change to fast would do it?

At one point in this game, goblins were one of the best defensive cards in Clash Royale. However, we are in a meta now where there isn’t much use for cheap counters, since beatdown is so prevalent in the meta. Like the bomber, it also severely hurts the goblins that they can’t kill air troops like the spear goblins, which is why they are so low in the meta right now.

The barbarians did move up a bit in these common cards rankings but they are definitely on the outside of the meta at the minute. The problem with buffing this card is that it would also buff battle ram, which is something Clash Royale definitely does not want to do. Until battle ram slows down a bit, barbarians will probably stay at the bottom.

While better than their ground brothers, the spear goblins are still outclassed by archers. Even the ice spirit is a viable option instead of the two elixir spear goblins. Similarly to the barbarians, unfortunately the spear goblins cannot be buffed without also buffing the goblin hut and goblin gang. Hopefully these guys can make a comeback soon!

With the rise of the royal giant, siege has suffered BIG TIME since the royal giant is able to take out the x-bow and mortar much faster. Now, there are definitely better archetypes out there than siege and only really skilled players are able to succeed right now with the mortar. Except a mortar and x-bow buff in the next couple of balance changes.

The fire spirits are going to be our biggest droppers of the rankings, falling 5 spots from #12 to #17. It’s nothing really against the fire spirits, but other cards have gotten better over the last few months through meta shifts and balancing. This card is still a pretty decent option, but there are definitely stronger cards out there right now in the meta.

With the buff to the inferno tower and the tesla still staying strong, the cannon is going to shrink down in the meta a few spots, just because it isn’t the top defense anymore. With the nerf to the tombstone, the cannon is definitely the best three elixir defense, but sometimes you want to spend a few more elixir to guarantee the defensive shutdown.

In the November balance changes, the skeleton got a decent buff, with the explosion from the barrel, combined with zap/ice spirit/ice golem, now being able to take out minions/minion horde. This is a huge buff and will definitely bring back a few mega knight decks featuring the skeleton barrel. Look for it to challenge the goblin barrel.

Surprisingly, the royal giant is NOT going to be the highest riser in these rankings, but it is definitely a ton better than where it was at in August. The November balance changes, the royal giant was completely reworked, giving him shorter range, but a ton more damage, which definitely led the royal giant to be a better offensive option.

As a solid defensive option, the archers are still there in the meta, but with the buff to the dart goblin instead of the archers, dart goblin is seriously going to take a lot of playing time from archers. If archers were buffed, they definitely would have been a top of the meta defensive card, but alas, the more annoying dart goblin got a buff.

Out of almost any card in Clash Royale, arrows is in the most interesting. It seems like Clash Royale can’t stop adding cheap spells, which obviously hurts the arrows in the meta. Personally, I’ve never used arrows in my decks, which skews my view of them. However, arrows could easily be a top 5 common card if you use them often to make sure to kill goblin gang and minions.

Remember when I said the royal giant wasn’t the higher mover of the rankings? That honor will go to the giant snowball, which has moved up 11 spots to the #11 common card. I’m think of the giant snowball in a log type situation, with it being extremely weak when it first came out, but growing through a series of buffs. This card offers more than its damage!

Even with the buff to the inferno tower, the tesla is going to stay at the #10 ranking for November. The necessity for a solid 4 elixir defense is still there, and the tesla can answer on that. Using the tesla to shut down the hog rider is easy, and it can even be a pretty good match against the giant or mega knight.

If skeletons had four skeletons in the cards still, it would be one of the most valuable cards in Clash Royale. Even with three skeletons, the card is able to crack into the top 10 common cards. This is such versatile card, being used as a cheap defense, but also a quick cycle card to get back to your win conditions. These provide some major value for one elixir.

I feel as if the rascals don’t get much hype, but sneakily these guys have become one of the best defensive options in Clash Royale. With the rascal boy being able to tank a lot of damage and the rascal girls being able to shoot down air troops, this is definitely worth the value of 5 elixir. If they had a bit more offensive power, they’d be a top 5 card.

Overtime, the knight has consistently stayed a top 10 card in these power rankings. This is mostly do to his insanely high health for three elixir, as well as the underrated damage that the knight can do. Honestly, he’s been bouncing back between #1 and #8, but he’s definitely here to stay in the top 10 common cards.

With the giant snowball rising up and the buff to the skeleton barrel, the minion horde is definitely going to be a bit weaker, but there’s no doubt that it is still a super powerful card. Even with the wizard and other splash damage cards being towards the top, there is no beating the strength and power of 6 minions all working together!

Welcome back to the top 5 ice spirit! As we can tell with skeletons, cycle decks, and with it, cycle cards, are definitely on the rise in Clash Royale. In my opinion, the ice spirit offers more value than the skeletons, which is why it is ranked higher. A 1 second freeze can be extremely helpful for helping your troops get an additional hit on the tower in crunch time.

The fight between minions and bats for the better cheap flying troop has never been closer, but I gotta slot the minions just a bit below. This is still an amazing card, offering value without the fear of a negative elixir trade like the minion horde. You can put this card into any deck whatsoever and have it work to your advantage. Behind a tank, minions can deal a ton of damage!

Our first card in the top three is going to be bats, though they are falling a bit. Bats are still going to be an outstanding card for cheap support, with you spending only two elixir to have 5 air troops that can quickly eat up other cards. They are extremely weak, which is one of the reasons minions are catching them, but for now, bats remain in the top 3.

Welcome back the goblin gang to the top 2 of the common card rankings! This card is, without a doubt, one of the best defensive cards in Clash Royale. You get a swarm card that can kill both ground and air troops, not die to a zap, and costs only three elixir with the gang. There is no replacing the double spear goblins that come on the back of this card!

For the third straight time, the zap is going to top our common card rankings. Somehow, even with log, giant snowball, and barbarian barrel all being super popular, the zap is still able to reign supreme as the best spell in Clash Royale. You will never be able to beat its quick deploy time that can stun and reset all opposing troops in an instant.

So that is going to wrap it up for our common card rankings for November of 2018! Stay tuned soon to see our rare, epic, and legendary card rankings soon. Thanks for reading and comment below what you think of the rankings!